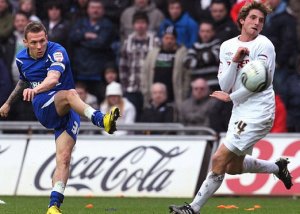 This is the first time the teams will have met at this level. All previous meetings between Cardiff and Swansea have been at Championship level or below.

Another fact for you is that neither side has ever completed a League double over the other.

Cardiff 'welcome' Swansea to the capital on Sunday for a massive South Wales derby. The last time the teams met was in Swansea in 2011. Craig Bellamy, in his first season at Cardiff, scored a late winner.

Results on Saturday mean that a Cardiff win would be worth a leap of 5 places to 12th.

The Bluebirds will be 2nd favourites though against a Swansea side who are in their third season at this level. But it's a derby game. Anything could happen.

Craig Bellamy is set to return to the starting line-up and take the captaincy for the Bluebirds' meeting with their fierce rivals, while Gary Medel will start his first south Wales derby in midfield.

Andreas Cornelius is expected to remain out with an ankle injury but Craig Noone should be available after an ankle problem.

Swansea manager Michael Laudrup has Ashley Williams fit to lead his side, but will be without winger Pablo Hernandez.

Williams returned from an ankle ligament problem in the draw with West Ham and suffered no reaction from his 90-minute outing but Hernandez has picked up another thigh problem after making his own comeback against the Hammers.

Ben Davies will again miss out with his ankle injury, but Jonjo Shelvey has shaken off a hamstring problem.

"We're playing a team who are in their third season in the Premier League.

"Put the derby angle to one side, we're playing a mid-table side which brings its own challenges and that's what we're facing.

"Throw into the mix it's our biggest local rival and the first derby at the top level and it's absolutely going to be a tough challenge going into the game."

"It's not just another game and I would be lying if I said that.

"It's only three points and it's another Premier League team coming to the stadium, but there is a lot of importance attached to the game as it's the first time we have played each other at the top level in the Premier League.

"It's very special for everyone in South Wales.

"For ourselves and Swansea it has absolutely got a little bite to it and that's something that helps people.

"I know the passion of our fans and what the atmosphere in our stadium is like, but I don't think it is going to touch the sides of what we will feel on Sunday.

"It will be an incredible atmosphere when the players walk out. I think it is something all our fans have looked forward to since we were promoted and it does hold that extra special edge."

"I still think we will play our way, like we do in any other game.

"It's possible they will try and press us high but we have played other teams before that we knew would probably try to press us high.

"If that happens we think 'what can we do?' and if they sit deep we think the same.

"Most teams do, some do it more than others, but I think we have improved in this area."