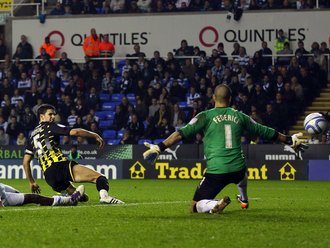 "It was always going to be hard playing against a side that has only lost one game in 10," said Mackay.

"Brian McDermott's teams play at a high tempo but we matched their intensity and tempo and then our qualities came out.

"I thought that when Reading did score towards the end that it was against the run of play.

"It made the last 10 or 15 minutes interesting, but when we won balls back I thought we were calm in taking the ball up the pitch to give us a breather.

"I thought our 4,000 fans brought a real atmosphere to the game. It was really fantastic. It really blew me away and I wanted to thank them at the end.

"I have seen Peter Whittingham score goals like his opening effort in training and his ball in for Mark Hudson's goal (pictured) was superb.

"Whittingham has always had a talent on the all but I am delighted with the amount of tackles he is making and second balls that he is picking up."

Reading boss Brian McDermott said: "I think we should have won the game. The first goal is one you will not see often and the second was disappointing from our point of view.

"I thought all three of our claims for first half penalties were justified. You would think you would get one of them. I think between the referee and the linesman they have missed three. There's two handballs and (Mikele) Leigertwood s been pulled back.

"Our problem is that we have lost some quality players, including a striker that has just got the winner for West Brom today.

"It was a similar scenario for us at this time last season but we just have to move forward quickly and concentrate on the next game.

"I am pleased that the crowd stayed with our players who showed desire and we have just got to stick with it.

"It's frustrating but all we can do is work hard on the training ground to keep going."