It is with great sadness that we have to report the passing of Graham Keenor, whose uncle was Fred Keenor, Cardiff City’s FA Cup Final winning skipper. 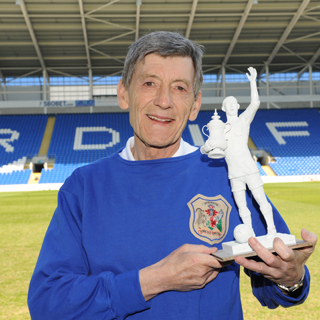 Graham played a key role in Cardiff City Supporters’ Trust’s fundraising campaign for a statue in honour of Fred Keenor and the 1927 team which was delivered in November, 2012.

Graham, who lived in Cardiff, died peacefully at the age of 78 after suffering from Alzheimer’s Disease for a number of years. He leaves a wife, Jackie and daughter, Judith.

Trust vice-chair David Craig, who was the project manager for the statue campaign, said: “Graham was a key member of the Trust’s statue committee and worked really hard as we campaigned to raise £8​5​,000 for the tribute to Fred.

“There was, of course, the family connection and Graham was full of pride when the dream of a tribute was realised because, he believed, Fred’s unique contribution to Cardiff City history should be recognised.

“We offer our deepest condolences to Jackie and Graham’s family at this difficult time. He will be sorely missed by friends and relatives alike.”