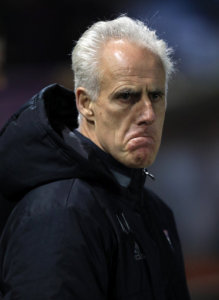 “We were well beaten,” McCarthy said “We were poor and I thought they were good.

“I guess Neil [Warnock] will say that you go out and beat somebody and you make them play poorly, badly, you don’t let them get going.

“I thought they were very good but I didn’t think we were anywhere near what our standards have been.

"We're in a relegation scrap, there is no denying that.

"I'm looking over my shoulder at teams behind me not in-front.

"I haven't shied away from that, we can't afford to play like that because there is always somebody that scraps their way out.

"It's amazing the fight you see when you are battling your way out of the relegation zone, but it can be quite the opposite when you get dragged into it.

"We all need to regroup; we have some huge games against Birmingham and Wigan coming up so we need to compete better.

"It's important that everyone's in it together and we need to make Portman Road a tough place to go.

"I'm not happy, and I'm not happy that others aren't happy and I understand the discerning voices.

"They played well and we played poorly - we shouldn't be conceding goals like we did today."

Cardiff boss Neil Warnock hailed Kenneth Zohore's turnaround in form since his arrival, with the forward having netted only once this season before Warnock's appointment.

He said: "He was a waste of time when I first arrived, he just walked about and always had his gloves on.

"But he's a nice lad – it was a crucial moment in his career and the penny has finally dropped for him.

"He's got every attribute a good striker needs, you can't coach him.

"You wouldn't swap him for many in this league. There have been a few players like him who have surprised me like Victor Moses and Phil Jagielka.

"With a little bit more nous we would have nine points from three games, but if you had told me we would have had 51 points with eight games to go, I would have snapped your hand off.

"We were winning battles in every department, and the fans got behind us to create a brilliant atmosphere. We created a lot more today and I really enjoyed it."