Action and reaction as City draw at Blackburn

The Bluebirds were on course to take all three points back to South Wales when Kenneth Zohore slammed in his seventh goal in his past eight appearances six minutes before the interval.

Yet, with Rovers' Championship relegation rivals Wigan, Bristol City, Wolves and Burton all picking up at least a point, Derrick Williams got on the end of Connor Mahoney's last-minute cross to earn the hosts a share of the spoils in a crucial 1-1 draw that keeps them two points clear of trouble.

Warnock only named six substitutes and took responsibility for the equaliser, having introduced Declan John and Craig Noone from the bench, both of whom he felt were culpable in Williams' goal.

"Before the game you'd have taken a point, wouldn't you," he said.

"It's my own fault - I put the subs on. We didn't have any choice tonight, many subs, and two of them cost us the goal. Declan should have stopped the cross, Nooney's with his man. You live and learn, don't you? That's what we're doing - learning about next season and who you want on board."

The Yorkshireman had already ruled his mid-table team out of making a late surge into the play-offs at the weekend, but he is confident that a side that were second bottom when he arrived in October will be contenders in the division next term.

"When you think where they were, you wouldn't think it was the same bunch of players - they've been excellent," he said.

"We didn't sign anyone in January. For the future we know where we're looking and if we can just improve one or two areas with quality I think we'll be as good as anyone, no matter how much other teams spend."

Warnock reserved special praise for the travelling Bluebirds contingent too, adding: "I thought the fans were brilliant - who'd want to come to Blackburn on a Tuesday night from Wales?" 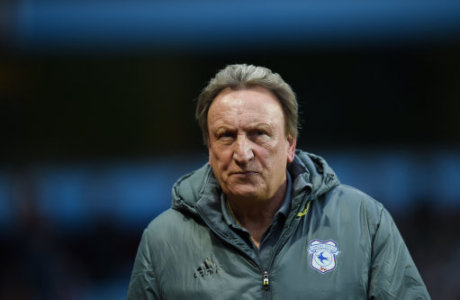 For most of the season Blackburn's fans must have been wondering why they bothered making the considerably shorter trip to Ewood Park.

However, Mowbray has steered them out of the drop zone and maintained his unbeaten start here to make it eight points from his four games at the helm - not that his overriding emotions were relief or delight.

"It's frustrating for me that we didn't take three points," he said.

"Before we'd kicked a ball, with this run of three games, we'd have probably taken seven points if you'd offered it us. We put it in the bag and move on.

"It's about what we do for ourselves, you can't rely on anyone else to keep losing football matches. We have to do it ourselves.

"We've seen our run-in, we've only got four left at home and we have to find a way of winning matches away. We'll work extremely hard to try and make that happen."