Action and reaction as City draw with Sheff Weds

Having kicked off his reign with victory over Bristol City, the Bluebirds had been on course to beat another side chasing promotion when Peter Whittingham's free-kick gave them a ninth-minute lead.

But the Owls dominated possession and an improved second-half showing got its reward when Daniel Pudil scored his first goal since December 10 minutes after the break.

It was enough to move Wednesday into the play-off places, while ensuring Cardiff remain in the bottom three. 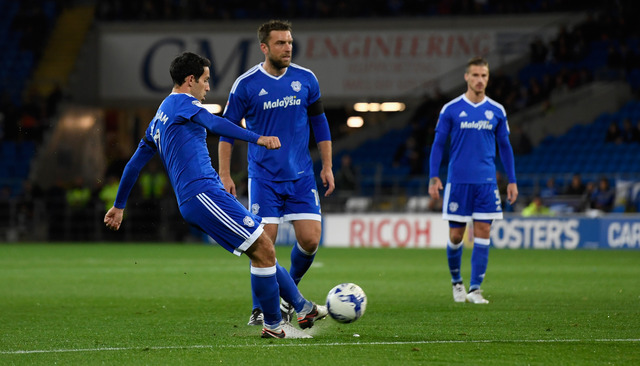 However, Warnock sees plenty of reasons to be confident his side can get out of trouble.

"I think four points from two games is fabulous really. We had to hang in there but you have to do that against a good side like Sheffield Wednesday," he said.

"I am still disappointed with the goal we conceded, it was poor, but I was really pleased with the effort from the lads.

"We were not quite firing in attack but you will have games like that in the Championship and we live to fight another day.

"We will get a lot fitter and a lot sharper in the next couple of weeks, just in time for a tough run of games.

"The players are enjoying it, they put their bodies on the line. We were second best in a lot of areas in this game, but we were not second best in what we had under our shirts.

"I thought we were superb in that regard and the fans appreciated that."

Whittingham produced an excellent curling free-kick after Sam Hutchinson had brought down Craig Noone on the edge of the area.

Rickie Lambert wasted a chance to extend the lead when he fired over, while Sol Bamba and Sean Morrison had headers cleared off the line.

The introduction of Fernando Forestieri sparked the visitors into life and, after Pudil turned in Gary Hooper's cross, the Italian twice worked Ben Amos but could not beat the Cardiff goalkeeper.

Owls boss Carlos Carvalhal was reasonably happy with a point and hopes the back problem that forced goalkeeper Keiren Westwood off during the first half is not too serious.

"Keiren had a bit of a back problem which he felt during the warm-up, but he felt well enough to play," Carvalhal said.

"Then, during the early part of the game he felt it again and we felt it was best not to take a risk. I do not think it is too serious and we hope he can play this weekend.

"It made it difficult for us as we lost a substitution for the second half when we wanted to freshen things up, but I still feel we did well and were the better side.

"This is a marathon, not a sprint competition. In one week everything can change in the Championship.

"I think we are better this season at this point compared with last season. The quality of football is better than last season which is a positive."