Action and reaction as City lose at Brighton

Albion leapfrogged Newcastle and went a commanding 11 points clear of Reading and Huddersfield with a 1-0 victory before a crowd of 26,688 at the Amex Stadium.

Hemed has seen his first-team opportunities limited this season with Glenn Murray leading the attack with Sam Baldock and Hughton admitted he has been "frustrated".

With Murray suspended and Baldock ruled unfit due a calf injury, Hemed led the line with Solly March playing just behind him, and Hughton felt his contribution was outstanding as Albion made it five home league wins in a row. 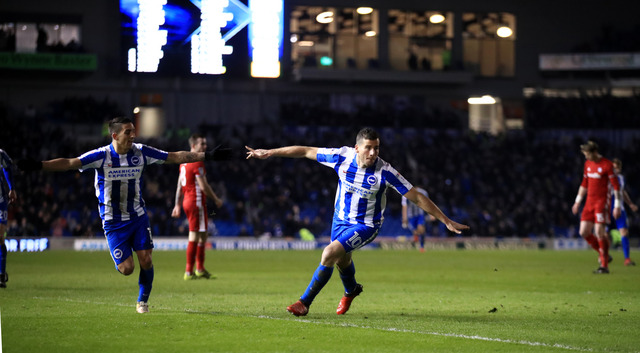 Hemed settled the issue with a rasping right-foot shot 17 minutes from time and Hughton said: "It was a great goal; he created something out of nothing.

"Tomer has not started many games and he has been frustrated, no doubt. But he's done what every good professional does and that is makes the most the opportunity when it has come."

Brighton are firmly on course for automatic promotion having lost only one of their last 21 league games and Hughton said he felt his men had "worked very hard" to open up an 11-point cushion on third place.

He added: "We have shown ability to get over the line and are capable of winning games in different ways.

"We are always in the game and you always know that we can turn it.

"In this performance I was confident we would score; I always felt we had enough in the side to be able to find the goal."

Cardiff manager Neil Warnock believes the situation at the top of the Championship is now such that both Brighton and Newcastle could lose "four or five games and still go up."

He said: "I think Brighton are the best team and Newcastle have the best squad.

"The 12-point gap to third place means that the top two can lose four or five games and still go up.

"Chris (Hughton) will be pleased to come out of this game with a win but you want them to go up after last season. It was a travesty that they missed out then."

Warnock felt his side pushed Albion all the way and credited Seagulls keeper David Stockdale for making three important saves in the first half.

He added: "We put them in a game. The atmosphere was fabulous, we know Brighton come at you but we weathered it in the first half and created chances.

"Jazz Richards handled Anthony Knockaert very well really but when the goal came Hemed hit it with such power."

Warnock stressed that he will not be signing new players in the transfer window for the sake of it.

He said: "I won't do it for the sake of it. We do need two or three quality players and were not too far away against the best side."