Action and reaction as City open 2017 with a win

Steve Bruce fired a warning to Jack Grealish after his Aston Villa side produced a poor performance in their 1-0 defeat at Cardiff.

Joe Ralls' first-half goal gave the Bluebirds the win but Villa boss Bruce was not a happy man after he watched his team fail to get going before half-time.

The visitors were much better after the break but with Grealish cutting a frustrated figure, the home side came out on top.

"They have kicked him from pillar to post in both games," Bruce said after Grealish failed to spark Villa into life. 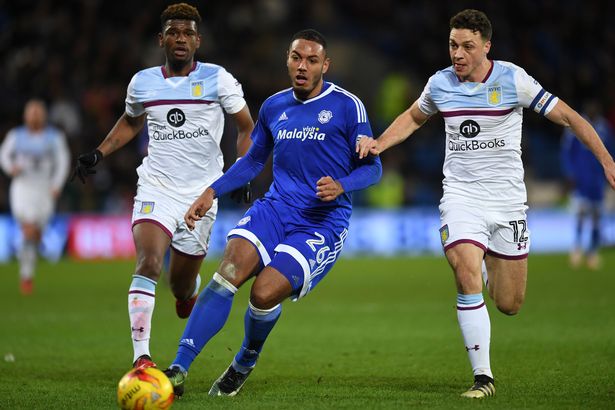 "The referees have to have the courage and the balls to protect him, that's the first thing.

"But Jack needs to learn not to react. We're English and we don't want players throwing their arms up in the air when they're tackled or think decisions have gone against them."

The introduction of Gabriel Agbonlahor at half-time saw the former outcast bring two excellent saves from Brian Murphy, but he could not get his team back into the game.

"It was a slow start - it was that slow that we stopped," Bruce added.

"That's two or three times we've done that now and the first half was nowhere near the performance required. The only thing I can put it down to is mentality.

"We're arguably the biggest club in this division and that makes us a scalp but if we don't find the right mentality, we won't achieve what we want." Ralls' strike came from a traditional goalmouth scramble. A Joe Bennett corner from the right wasn't cleared, the loose ball hitting the midfielder and finding the bottom corner without the Cardiff man knowing much about it.

It gave the Bluebirds a deserved lead but they were forced to hang on for dear life after the break. It left their manager Neil Warnock delighted at his team's resilience.

In Sean Morrison, Sol Bamba and Aron Gunnarsson, Cardiff had the leaders required to secure a vital three points which boosted them clear of the Championship relegation zone.

"That's the best we've played by a mile since I've been at the club," a delighted Warnock said. "I thought we dominated for large periods and all round it was a good performance.

"It was a great atmosphere and the game had everything really. It was like a cup tie and I thought that 30 minutes into the first half we were going to regret the missed chances.

"But in the Championship you need people to stand up when the chips are down and we did that in the second half."