Former Liverpool captain Alan Hansen believes Cardiff City manager Malky Mackay will soon be targeted by Premier League clubs.
Mackay is in his first season in charge of the Bluebirds and led them to the final of the Carling Cup.

Despite defeat on penalties to Liverpool, manager Mackay will now be in demand according to Hansen.

"I'm sure if a big job comes up Malky will be one of the candidates to get it," Hansen told BBC Radio Wales Sport.

"In the Premier League there are jobs coming up every five minutes.

"I'm not saying for one minute he'll leave Cardiff because he has great affinity with the supporters and the football club.

"History tells you that if a big club comes beckoning, the vast majority of managers will go to that big club. It's human nature [and] that's the way the world works."

Mackay left his role at Watford to succeed Dave Jones as Cardiff manager last June and has overseen a push for promotion as well as a Carling Cup run.

The former Norwich City defender signed a new three-and-a-half year contract on the eve of the Wembley final against Liverpool.

And Match of the Day pundit Hansen says Cardiff have made a wise move in securing Mackay's future.

"He's proved at Watford and he's proved at Cardiff that he's a top class manager," added the former Scotland international.

"It was a shrewd move by the Cardiff hierarchy to keep him there for three-and-a-half years.

"The main thing for them is to try and push for promotion." 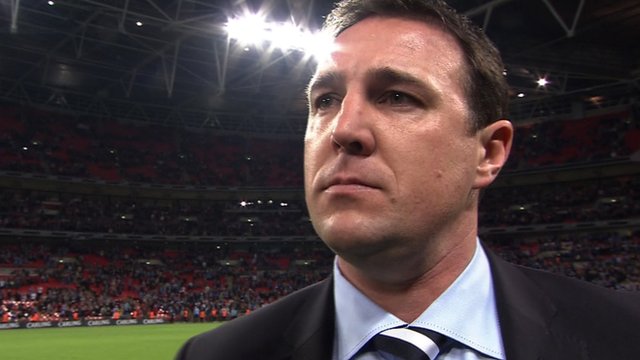 We lost with dignity - Mackay

Hansen was left impressed by Cardiff's display at Wembley against his former club, who secured their first trophy in six years.

"I thought Cardiff City put on one of the great Wembley performances," he said.

"Performances like that in a major cup final, or at any time, are few and far between and it was fantastic to watch.

"I think it will go down in the annals of time as one of the great underdog performances.

"I know they didn't win and people still talk about Wimbledon against Liverpool in 1988 [FA Cup final].

"But Wimbledon were in the top 10 of the [old first] division whereas Cardiff are a team in a division below Liverpool.

"I think they won a lot of friends for the simple reason - the way they fought.

"They never capitulated in any way shape or form. They kept on going for the jersey, the supporters, the manager and it was great to see.

"There were a lot of heroes on the day and it was a great game of football."