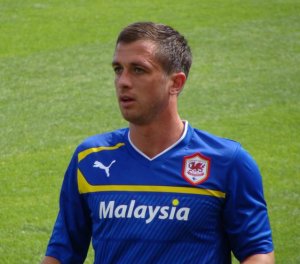 Taylor signed for Cardiff in 2011 and made over 100 appearances. He was a bit part player during last seasons Premier League campaign as both Malky Mackay and Ole Gunnar Solskjaer rotated their full backs.

Wigan manager Uwe Rossler is pleased with his new player.

Rosler told his club’s official website: “I’m very, very happy to get a player of Andrew’s stature and experience to our football club.

“He was the captain of Malky Mackay’s promotion-winning team, he is a very experienced and reliable player who is at the best stage of his career and I’m looking forward to working with him.

“He has all the qualities in his position that we are looking for; physically, technically he’s very good and tactically he has developed as a player well.”

“The manager seems really good and I think his record when he came to the club last season speaks volumes.

“It’s a fresh challenge for me and one I’m very excited about; I had three good years at Cardiff but everything has to come to an end and I’m looking forward to getting started at the DW Stadium.”