But is it all it seems?

On Thursday Cardiff City FC made the following statement on the official website www.cardiffcityfc.co.uk

Cardiff City Football Club on Wednesday May 29th launched the first images of the 2013/14 home kit, which featured two shades of red, the darker of which was carried in the shorts.

The decision had been made as a means to help visually distinguish the club in the Premier League, while continuing the theme of our successful 2012/13 Championship winning season.

The resulting response carried across social media quickly indicated that a large number of supporters were unhappy with the choice of colour concerning the shorts. For that we apologise.

So they decided to give all season ticket holders with an email address registered on the database a chance to vote for their choice of shorts. The club say that some 12,000 fans will decide on one of the following four options. 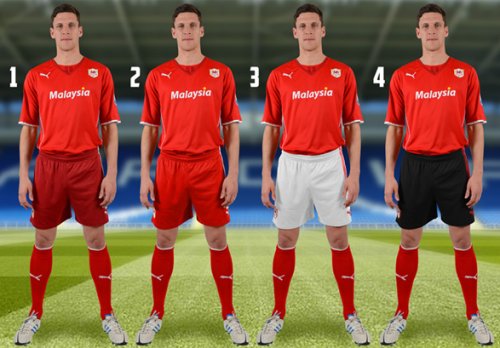 Voting closes at 2pm today (Friday 31st May) and multiple votes will result in all votes from that person to be rejected and anyone who votes will be checked against the database as a season ticket holder.

Now you may have sensed a little bit of cynicism from me at the start of the article.

I'm sure that most Cardiff fans want to see the team play in blue, There is of course no blue option so when the votes are counted and verified the fanbase will be declared by the club to have chosen the colour of shorts of their choice. A victory for the fans!! But it's not their choice really is it?

Imagine if the vote had the following five options. 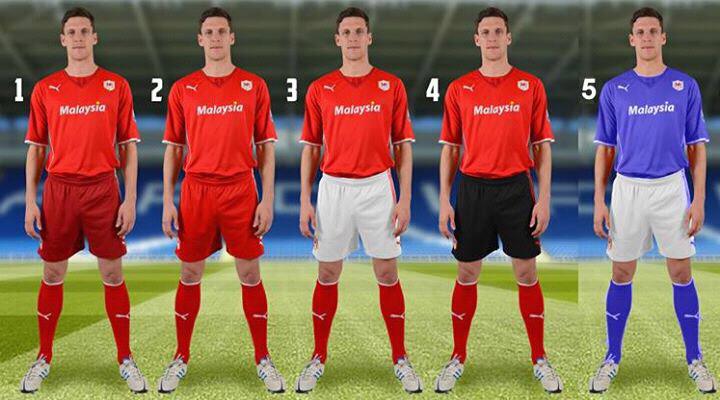 Then we'd have an idea what the fanbase really thought. As it is the club will celebrate the choice of the fans for choosing a red/white/black shorts to go with the immovable red shirt (notice all attention has been taken away from that). It's basically turkey's voting for Christmas.

You wonder if it's not all a set up in the first place. It reflects the same pattern as last year. Hit us with the shock of a red kit, remove the bluebird and then re-introduce the bluebird after fans backlash and so pass the red kit through with fans thinking they have won by keeping an icon less that 1cm sq.

This time the fans choice of shorts will be seen as a victory while the establishment get an easy ride over a second season in colours alien to the traditions of the football club.

Sell out crowds this coming season will seem as though success and Premier League are all that matters to most fans but the support for a return to blue is growing and the national media are picking up on it. Now we are Premier League the eyes of the world will spend more time looking at Cardiff City FC.

The success on the pitch and throughout the club with titles such as Family Club of the Year etc are tainted by the tomfoolery associated with the colour change and it's poorly chosen decisions.

Cardiff City FC have finally arrived at the destination fans have dreamed of, they have taken their place at the top table of English football and the Chairman should never have to buy a drink wherever he goes in Cardiff and the surrounding areas but the antics regarding the rebrand and this latest nonsense will mean he will be a target of ridicule.

These should be the best moments of our Cardiff City supporting lives. Not a time where fans, friends and familes are at each others throats over the destruction of our blue history.