Are they having a scarf? 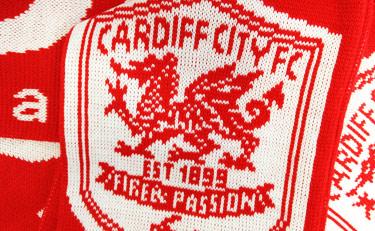 Cardiff City are handing out over 20,000 free scarves to fans at the City v Brighton game next Tuesday.

They will of course be red and carry the current red dragon logo. The incentive to wear / wave the scarf for the remaining home games of the season is that if you are the lucky fan photographed and selected by the club with the free gift you will get the cost of your season ticket refunded.

It's marketing genius and will no doubt be a huge success but in my mind it's another step towards ridding the club of blue and the Bluebirds. In the longer term the mindset from the owners is Malaysia FC. Only last week Vincent Tan was quoted as saying that QPR v Cardiff in the Premier League would be a Malaysia derby! What? The vision appears to be a club representing Malaysia, not Cardiff.

Just playing in red with a red badge hasn't had the desired affect in the stadium with many fans still wearing and waving blue. So now the club are trying to force the change.

The promotion from the club via email follows:

The cold-snap seems intent on snapping further every week, so next Tuesday night as we host Brighton, we will be giving every Cardiff City supporter a FREE high quality scarf as a means to keep warm, the club saying a big thank you for your support this season.

Each scarf will be handed out on arrival at the stadium - for this game only - and will become your special entry pass into our 2013/14 season ticket competition for the rest of the campaign.

During every home game from Tuesday until the final fixture we will be keeping our cameras tracked on supporters wearing or waving their 'City scarf. Photos will be taken in the concourses, stands, hospitality areas and more, forming a part of our post match FACEBOOK galleries.

After each game we will publish the photo of each lucky winner - and if it's YOU, we will refund your season ticket for the season ahead. Check our Facebook page, giving us a LIKE while you're there to make sure you get notified as soon as the galleries go live, including the winning photo!

Good luck one and all. We hope you enjoy your free gift and make sure to bring it to every game as we push for glory!!