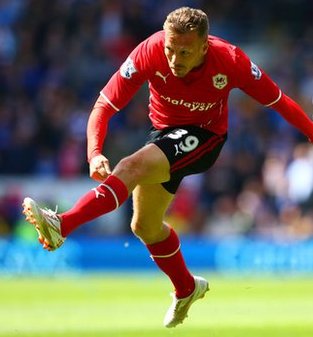 Cardiff finished bottom of the Premier League after losing their final game of the season, 2-1 at home to Chelsea.

Bellamy, 34, who has played 87 games in two spells at Cardiff, applauded all corners of the stadium when he was substituted in the second half.

"We've had chats and he's going to think about what he wants to do in the future," said Solsjkaer.

The 78-times capped former Wales international forward hugged Chelsea manager Jose Mourinho as he left the pitch on Sunday, adding to the feeling that he could have been making his final appearance.

Solskjaer confirmed the player was taking time out, and that several people at Cardiff were taking stock, but that no decision had been made on Bellamy.

"For everyone at the club it's been a long trying and testing period and people need time to reflect and think about where you want to go and what you want to do."

Bellamy scored in the first half to give Cardiff City the lead against Chelsea, but that was wiped out when substitute Andre Shurrle and striker Fernando Torres struck late in the second half for the visitors.

The defeat left Cardiff in 20th place at the end of their first season in England's top flight for 51 years.

Former Manchester United star Solskjaer expects to have a busy summer in the transfer market as he starts to rebuild for next season's Championship campaign.

"We've got to keep the core of this group," he said.

"We're going to try to keep the most important ones, of course, and add and strengthen with a few different types of players that I think we need.

"We're going to have to be maybe inventive and innovative in the transfer market and maybe some loans with players of good quality from top teams."

Some players are expected to leave, with captain Steven Caulker and Gary Medel both having release clauses in their contracts which can be triggered by relegation.

And Norwegian midfielder Mats Daehli has been linked with a move to Chelsea, though Mourinho played down the prospect of a transfer.

"He's a good player, but we're not interested," said Mourinho.