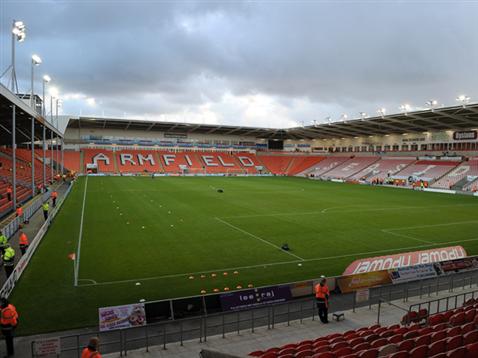 It leaves Thompson poised to take their reins once more having repeatedly stated his interest in replacing Appleton on a permanent basis.

Winger Matt Phillips has returned to light training following a toe injury but the match comes too soon for the Scotland international.

Experienced centre-back Ian Evatt remains sidelined due to bone bruising in his knee.

Cardiff boss Malky Mackay has, however, no fresh injury worries as his side look to build on their eight-point lead at the top of the Championship at Blackpool.

Striker Nicky Maynard is the only absentee with his ruptured cruciate knee ligaments for the trip to Bloomfield Road.

While Mackay is likely to start with the same back four ahead of goalkeeper David Marshall, he could be set to shuffle his pack in midfield and attack.

Up front, Heidar Helguson could return to the side in place of Rudy Gestede who was taken off at half-time in the 0-0 draw with Ipswich last weekend, while Tommy Smith could be set for a start after making his return from injury from the bench.

Kim Bo-Kyung and Jordon Mutch are also pushing for returns to the starting line-up for the televised clash.

With the Bluebirds out of the FA Cup, Mackay will take his side to Dubai for five days warm weather training ahead of their trip to Leeds on February 2.