After 99 games without a red card City have seen players sent off in last two matches. 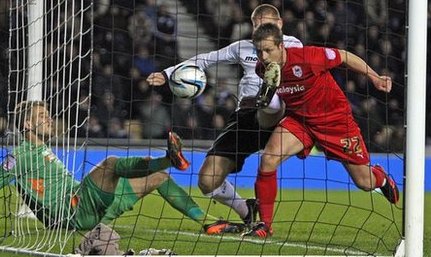 Craig Noone went at Pride Park for two yellow cards in quick succession. Until then City were holding onto a lead given to them by Heidar Helguson (above) in the 11th minute.

Derby were leading the stats on possession and chances and it was a tall order for Cardiff to silence the Rams after going a man down.

It took six minuters for the eleven men to equalise but the 10 men then saw the final 21 mins + 6 mins added time out to pick up a useful point.

I mention the stats. I can't remember Cardiff being quite so dominated. Derby were credited with 63% possession, had 19 efforts on goal to City's 7 and led the corner count 11 to 1.

Helguson's goal was a close range header after Mark Hudson headed Craig Noone's cross onto the bar. Helguson was on hand to put City in front.

Derby's leveller was a tap in afer City's defence was breached and the Bluebirds had Matt Connolly to thank for a last minute goal line clearance.

Next up it's Dave Jones' Sheffield Wednesday at CCS on Sunday, Jay Bothroyd et al as City look for a 10th straight home win.

With Wednesday getting stuffed at home by atford last night and struggling in the bottow three its an easy home win. Or is it?

Well to be honest it bloody well should be,