Cardiff City have set up a trust in the name of Emiliano Sala to support his family and fund footballing projects in his memory.

The Welsh club are still fighting their case against payment of the £15m transfer fee agreed with Nantes, a year on from the deaths of the Argentine striker and pilot David Ibbotson. 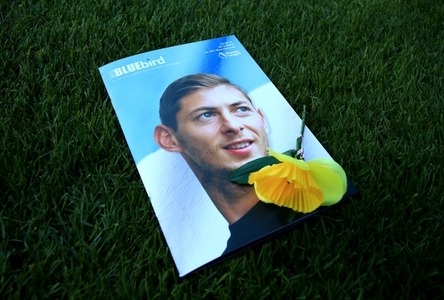 Earlier this week Cardiff submitted a file to French prosecutors they claim contained "sufficient evidence of wrongdoing" on Nantes' behalf regarding the transfer.

Now the Bluebirds say they will invest a "substantial amount of money" into the Emiliano Sala Memorial Trust.

The trust, launched in conjunction with the Sala family's lawyers, will see Cardiff donate money to support the family and grassroots football projects in his memory.

Cardiff chairman Mehmet Dalman has called on "the football world" to join the Bluebirds in donating to the fund, which will be controlled by independent trustees.

"We've had long discussions with the family and reached a stage where we have launched a trust fund for Emiliano," said Dalman.

"I'd like to see Nantes match what we put in, or any agent who has taken the high ground. Put your money where your mouth is.

"The joint venture by Cardiff City and the Sala family. They have been working on it for over a year.

"We have always wanted to do something for him and the family, we had to get them fully onside. You can't do it without the family.

"We worked tirelessly to make sure they were happy with every single thing. That was important and took time - cross-border issues, language issues, legal issues. Had to overcome that to where we wanted to be.

"I've been championing for this - as have Vincent [Tan, Cardiff's owner] and Ken [Choo, Cardiff's chief executive] - for a year and we've got something that makes sense.

"We would invite the football world, even the whole world, to make a contribution to this. Think the timing is just right after the anniversary. We didn't want to announce on the anniversary because that was all about the family and nobody else."

Cardiff chief executive Ken Choo added: "The family is very happy with this.

"The timing of this announcement is right, just after the one year anniversary."

As well as contributing financially, Cardiff plan to share information about Sala's death with the player's family.

Chris Nott, a senior partner with Capital Law who is working as Cardiff's lawyer for this case, said: "We are working with the family to help them find out the truth, collaborating with them to find out what happened to Emiliano.

"We are opening our files for them to tell them this is what we know.

"We'll have independent trustees, set up by Cardiff City and the family jointly.

"The purpose of it is that the trustees can do what they want with the money donated to it - imagine what Emiliano would have wanted, whether it's for his family or football clubs in his hometown."