Manager Chris Hughton will check on the fitness of striker Sam Baldock (calf) and Bruno, who both missed Friday's 2-1 win over Sheffield Wednesday.

While forward Glenn Murray, who had scored 15 goals for the Seagulls this season, was sent off in that clash and serves a one-match ban.

Gaetan Bong (knee) will be unavailable again and Liam Rosenior is also ruled out as he continues his recovery from an ankle injury. 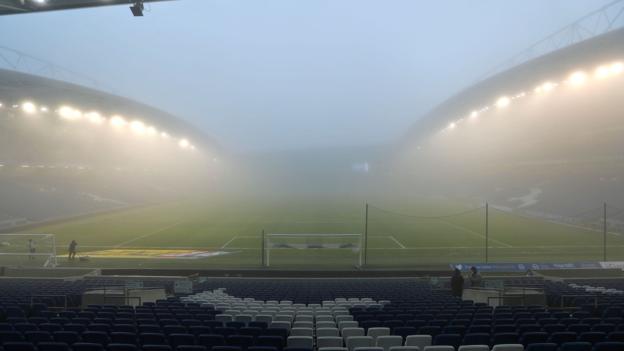 This game was rearranged following its postponement last month (picture from Dec 30th), and Hughton is hopeful they can claim the three points to go back above Newcastle.

"Of course we'd like to be top," he told Brighton's official website. "The best thing about being top is that there's a bigger gap and you've made ground on the teams below you; that's an important aspect.

"We all expect Newcastle to be up there because of the quality that they've got, and the closer we can stay to them, it gives us the best-possible chance.

"It's a really good opportunity for us to make sure we treat this game in the exact same way that we went about our business against Sheffield Wednesday. They were a top team and we see this game as no different, but it's also an opportunity to go back top again."

Rhys Healey is pushing for a start after scoring his first Cardiff goal in their 1-0 win over Burton on Saturday. It was just the striker's second substitute appearance for the club having scored six goals on loan at Newport this season.

Bruno Manga will return from the African Nations Cup after Gabon were knocked out on Monday but is unlikely to feature a day later.

Boss Neil Warnock, meanwhile, insists all the pressure is on promotion-chasing Brighton rather than his side.

"I don't worry about your Brightons and your Readings," said Warnock. "And that's because we'll give them a good game - are you with me? The pressure's all on those teams."

Referee: Keith Stroud (replacing Chris Kavanagh who was originally selected for this game)