Yesterday’s lunchtime defeat by 2-1 at Ashton Gate against Bristol City was the first example this season of those occasional games every year where circumstances mean I have next to no access to pictures, commentary or online updates as to what is happening in a City game.

It tends to happen two or three times a season and so, as I suspect virtually everyone who reads this will be better informed than me as to what happened, I’ll do what I always do on here when this happens and limit myself to a few general observations on matters arising from the match.

The first thing to strike me on watching the highlights of the game is that, if they represent an accurate reflection of what happened, then it must have been a pretty dour affair with both sides, perhaps, being more concerned with avoiding defeat than going for the three points.

Certainly, from a City perspective, the selection of Craig Bryson instead of Lee Tomlin as the only change from the side which beat Ipswich has to be seen as a cautious move. That said, with Tomlin having been sentenced the day before to eighty hours of community service and having to pay prosecution costs after pleading guilty to affray while out in Leicester with Accrington Stanley striker Billy Kee in January (charges of wounding and GBH against Tomlin were dropped by the prosecution and on the orders of the judge respectively), Neil Warnock’s decision could be understood on the grounds that the player would not be in the right frame of mind to start against his former club.

In the event, the only piece of live action I was able to listen to came just after half time with the score at 1-1 and, as it turned out, I heard what was, if not the game’s decisive moment, perhaps it’s second most important one. 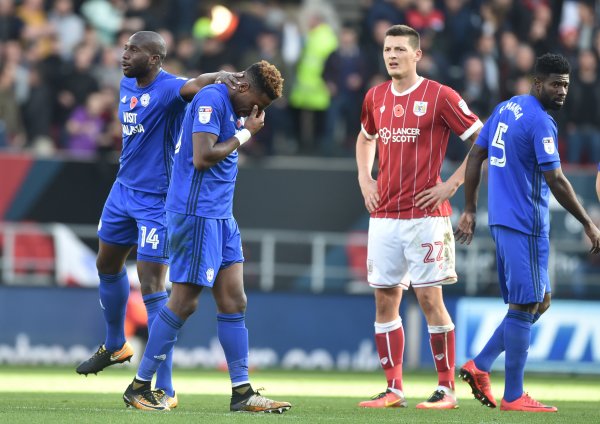 I tuned into Radio Wales’ commentary just as Bristol midfield player Marlon Pack (who had already been booked) was fouling Sol Bamba. The immediate reaction from the commentators was that Pack may well be seeing red because it was a bad foul, but, by the time it had become obvious that Premier League ref Mike Jones had decided that just the awarding of the free kick was sufficient punishment for the player, they seemed to have come around to thinking that the right decision had been made.

I’ve not seen the challenge yet, so cannot comment on whether Mr Jones got it right or not, but, in light of what happened a few minutes later and how the game ended up, it was always going to be an incident that would attract comment afterwards.

What seems to be agreed by all concerned was that the official was right to send Omar Bogle off after he ploughed into Pack shortly afterwards. The striker, who had scored his second goal in two games when he had equalised Callum O’Dowda’s well taken opener for the home side, was, seemingly, upset when play was not stopped to allow him treatment after he had gone down following an earlier heavy challenge, but this could be no excuse for the lunge on Pack which, from the pictures I saw, left Mr Jones with no alternative but to dismiss our goalscorer.

On the day before the match our manager had praised Mr Jones, but he was less complimentary once it been completed. However, tellingly, Warnock’s ire was directed at the decision not to send off Pack, rather than the one to dismiss Bogle – on that score, he had no complaints whatsoever and was scathing in his criticism of his centre forward who he accused of costing City the game.

Our manager also found time to have a justified moan about the way the winning goal was conceded as home centreback Aiden Flint was allowed to run onto a long throw in and power home a header as he gained a yard or two on Sean Morrison – the City captain was at fault then, but there were others who looked pretty static as we conceded the sort of goal we really shouldn’t be doing given the height we have at the back and in other areas of the pitch.

I touched on the decision not to start with Tomlin earlier and said I thought Neil Warnock’s decision was understandable in the circumstances, but was the choice to replace him with Bryson the right one? Again, I’ve not seen enough of the match to comment with any authority, but I have read reports which said our midfield was “overrun” in the first half and it seems that nothing happened yesterday to quell a growing feeling I’ve had that, although Neil Warnock’s overall record in the transfer market during the summer should be seen as a good one, his two deadline day signings need to do a lot more yet before they can be said to offer further evidence of how well our manager did.

There are some positions on the pitch where being thirty should not be seen as a problem, but I would argue that box to box midfielder and winger are not two of them. It would be wrong to say all players who are thirty in those positions (Bryson is thirty one tomorrow and Liam Feeney reaches that age in January)  are in decline, but I feel that they are often at a stage in their careers where the game is becoming not as easy for them as it once was and often this means they have to started adapting their game to adjust to the changes their body is going through.

Warnock praised Feeney’s contribution after he was brought on as a seventh minute replacement for Nathaniel Mendez-Laing and questioned whether he may have made a mistake in taking him  off when Danny Ward came on following Bogle’s dismissal, but, based on what I’ve seen of him, that assist at Fulham apart, all Feeney is doing is showing us how much we are missing Kadeem Harris who is yet to feature this season.

Especially after the way he played in midweek, losing Mendez-Laing so early in the game was a big blow for a manager who is having to cope with injuries to important players like Zohore, Gunnarsson, Bennett, Harris and Richards (Lee Camp has had to have another operation as well and it looks like his City first team debut is still some way off yet, while Anthony Pilkington picked up a very bad dead leg injury early last week which stopped him being a member of the eighteen against Ipswich), but, on a hopeful note, Warnock seemed to think that the winger’s injury was a minor one and that he, like the first three named above, will be available for selection when fixtures resume in a fortnight after the latest international break.

Given those injuries and the decision not to start with Tomlin, the like for like substitution of Mendez-Lange by Feeney so early in the game seems the obvious move for him to make, but I wonder if Neil Warnock gave any thought to bringing on Danny Ward at that time? Ward could have gone on to the left and offered more support to Bogle whose frustration levels due to him being isolated up front may have been increasing as the game progressed.

Finally, with everything pointing to City not appealing against Bogle’s red card, the striker will have to serve a three game suspension. Understandably, this news overshadowed the fact that Lee Peltier’s early booking (Warnock contrasted the innocuous level of Peltier’s offence with what Pack was to “get away with” later in the game) was his fifth of the season which should mean that he will miss the Brentford match as well.

Home wins for Wolves and Sheffield United this weekend mean that we are back down to third, but that is still some way ahead of what our manager, who has said he would have been happy with being in the top eight at this stage of the season, was targeting. City have made a great start to the season, but they need to have a bigger pool of fit and available players to select from when fixtures resume than they have had for the last two or three matches.