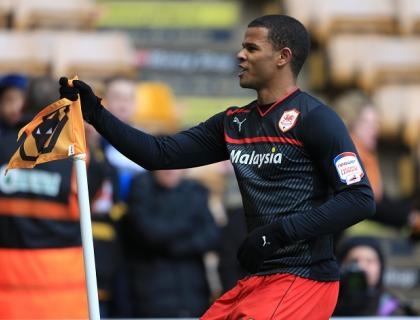 The one-cap England striker, who joined from Sunderland in January, netted either side of half-time to pile the misery on the Molineux club, for whom Bakary Sako reduced the deficit.

And while a ninth consecutive away match without defeat keeps the Bluebirds top - a position they have occupied since late November - an 11th game without a win means Wolves are facing the bleak prospect of a second consecutive relegation.

The opening exchanges saw a flurry of long-range efforts, with Aron Gunnarsson and Peter Whittingham failing to trouble Carl Ikeme before Bjorn Sigurdarson flashed a 25-yard strike just wide for the hosts. Kaspars Gorkss was leading by example when he chased down the lively Craig Bellamy to deny him a crossing opportunity.

Roger Johnson had to be similarly alert to ensure Whittingham's goal-bound effort was diverted clear of the crossbar moments later. But their resistance was broken after 20 minutes and the simplicity of the breakthrough goal revealed so much about Wolves' frailties.

Gunnarsson's long throw was flicked into the path of Campbell and his header from six yards gave Ikeme no chance. The visitors' dominance only grew but there were some signs of promise for Wolves in the first half, with Sigurdarson tricking his way down the left and providing a cross for Sako, who headed just wide with 30 minutes gone.

And it was Sako who wasted his side's best chance of the half, miscuing wide when well placed following Sigurdarson's cut-back. But Cardiff were always quick to underline their threat at the other end and Whittingham volleyed narrowly over the bar before the interval.

Saunders made a bold double change at the break, introducing forwards Sylvan Ebanks-Blake and Kevin Doyle in place of midfielder Tongo Doumbia and defender Danny Batth. Within a couple of minutes of the restart, City had the ball in the net but Bellamy's effort from Ikeme's fumble was ruled out for offside.

There was no linesman's intervention when Campbell headed in Bellamy's cross after 67 minutes and it looked as though Cardiff had the points in the bag. A deflected free-kick from Sako three minutes later following Ben Turner's foul on Doyle gave Wolves hope.

But even that soon disappeared as the clock ticked down and Ebanks-Blake spurned their final chance to take something from the game when his shot from Sako's cross bounced off the turf and over the bar.