Twenty seven goal attempts to two (one of which went out for a throw in). Five efforts on target to one and yet the team under the cosh for what turned out to one hundred and one minutes ends up winning 1-0! 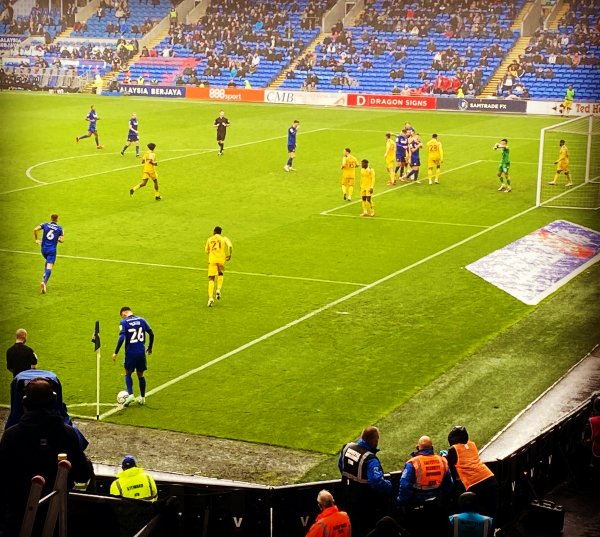 Make no mistake, Cardiff City were desperately unlucky to lose a fifth successive game today to modern day bogey team Reading (no wins in thirteen against them now I believe) in what was also a fifth successive home defeat for them. The result had a freakish quality to it which left you thinking that the footballing gods have clearly decided that we need to punished (for crimes against the beautiful game?) and, if any further proof were needed that it just wasn’t our day, it came deep into the ten minutes of added time when Ryan Giles’ cross bounced off the inside of the post and then bobbled about in the six yard box without anyone able to get the touch which would at least have enabled us to stop the rot with a draw.

The feeling that someone, somewhere is getting great pleasure out of sticking the knife into us was only added to by the fact that it was Junior Hoilett, five years a Bluebird before leaving in the summer, who scored the winner ten minutes before half time with a composed finish which was, I’m afraid, in total contrast to many of those aforesaid twenty seven Cardiff efforts.

If it’s possible to talk in terms of a fifth straight loss representing a better day, then this may be an occasion where you can say it. Certainly, the reaction of the crowd was far more positive than on Tuesday night when our manager had to face choruses of sacked in the morning from Cardiff and West Brom supporters. Here the support stayed with both the manager and the team because it was clear the players were giving their all.

As Mick McCarthy said after the match, it was not the display of a team that had lost faith in their manager and, although he adopted something of a what will be will be attitude as far his future at the club is concerned, he was adamant that it was the best his team had played in weeks.

Our manager was right as well, but therein lies the rub as far as I’m concerned. I say that for a few reasons, firstly, there have been a series of dreadful performances by the team (including one or two when we were getting results earlier in the season) over the past couple of months, why wasn’t there a reaction like this a few weeks ago?

Second, even when we’re playing pretty well by current standards, the old weaknesses still show themselves. For all that Reading rode their luck, they also defended well in terms of getting blocks or challenges in that just did enough to put a City forward off. Compare that to us where we concede from the only really testing moment our partly rejigged defence faced.

Thirdly, we go back to, perhaps, the most persistent of our faults- the lack of creativity which meant that for all of that pressure and sheer. volume of goal attempts, the only miss I can think of which may fall into the sitter category came from Aden Flint just before half time when Reading’s young keeper Luke Southwood made a mess of a cross and Flint blazed over the unguarded goal from six yards out – to be fair to the man who was captaining the side in the absence of the injured Sean Morrison, he did lose his footing somewhat as the ball dropped to him.

With Joe Ralls and Sam Bowen joining Marlon Pack in a three man midfield, City fielded what I’d say is definitely their best trio of passers in the middle of the park. As a result, we saw a lot less hoofball today from City, but, still, the passing while more accurate than usual, was not crisp enough to really inconvenience Reading.

That error I mentioned earlier from Southwood was the only he made all game and I’ve seen him nominated as Man of the Mstch on a couple of websites, but, although there were some good saves, I don’t think there were any that could be called outstanding and this highlights a lack of precision in front of goal which, if you take away the Flint/Morrison threat from set pieces, has been with us all season.

So, for all that this was better from City and the very least we deserved from the match was a draw, there was still a lot that was wrong with our performance. Now, some of that can be explained away by desperation engendered by our horrendous results and form and you’d like to think that a couple of better outcomes will see confidence levels rising, but, in truth, there were real concerns about some aspects of our play back in August when we were within a win of going top of the table and my faith in our manager being able to turn things around is definitely not as strong as it was a month or two ago.

Mick McCarthy promised changes in his pre game media briefing yesterday and he was as good as his word as the three centre back system, which he has used throughout his time here, was ditched – whether it would have been if Morrison was fit is debatable, but it was Flint and Curtis Nelson (both fortunate to keep their places in my view) who were combined through the middle. However, with Mark McGuiness and Ciaron Brown as full backs, we still fielded a defence made up entirely of centrebacks – I accept it’s being wise after the event, but given Reading’s lack of a threat down the flanks, would we have benefited from having, say, Perry No and Joel Bagan in the team?

In saying that, having not really seen what some were getting excited about in McGuiness up to now, I thought he played well today, although it would be good to see what he could bring to the team as a proper centreback, not an auxiliary one out on the right.

Having mentioned our lack of creativity earlier, I find it an odd mixture of the concerning and encouraging that in Ryan Giles and Rubin Colwill, a sub for Leandro Bacuna today, we have two players who can supply some of that elusive quality – Giles’ crossing was maybe not up to his early season levels, but it was still good enough to have brought about something more tangible with better anticipation from those inside him.

As for Colwill, he was a victim in what appears to be our manager’s misplaced faith in Bacuna as an attacking player. Once again, there was little from the former Reading player to persuade the large number of supporters who disagree with our manager that they may be wrong.

Colwill for Bacuna on the hour mark was the right move (even though it came an hour too late!), but the replacement of Bowen and Ralls (has he some sort of long term injury concern which prevents him from completing ninety minutes?) with James Collins and Will Vaulks in the eightieth minute did not work because we never regained the superiority and momentum we had through much of the second period afterwards – once again, I got the feeling that the youngster, Bowen in this case, was taken off just because he was a youngster.

Colwill has it in him to produce something out of nothing every now and then and I definitely think that if we are to have a creative hub in a modern day City team, it is the younger players who are more likely to provide it. However, this is as tough an induction as they could wish for and who’s to say whether the man who will have given them their introduction to first team football will still be here when they next play, at Swansea, following the October international break?

The sense of gloom around the club deepened a little this lunchtime as the Under 18s, who are struggling somewhat this season, were beaten 4-3 at Leckwith by Charlton with our goals being scored by Caleb Hughes, James Crole and Cian Ashford with a penalty.