Jamal Lowe scored twice, the second a sublime finish with the outside of his boot, to earn Swansea a comfortable and comprehensive victory at CCS. 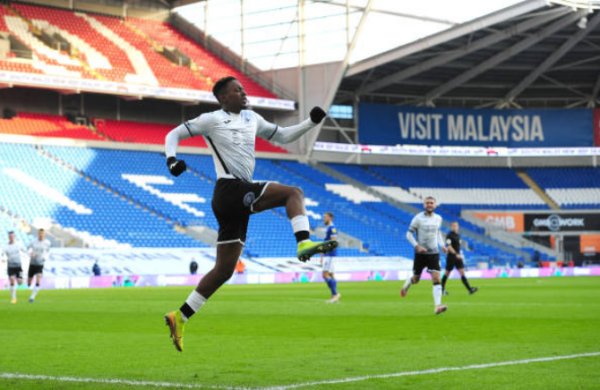 Cardiff offered little in a performance that saw Kieffer Moore limp off injured with a hamstring injury, Joe Ralls sent off for two yellow cards and the whole team seem to not realise that a derby game is one that you turn up for.

Lowe capitalised on a slow Cardiff start when his close range effort squirmed through Alex Smithies before he completed the scoring in the second half as he waltzed towrds goal from 40 yards out and using the outside of his boot nonchelantly stroked the ball past Smithies who was left exposed by his leaky defence. Quality goal and one that Swansea fans will dine out on for a long time.

It's a stunning solo goal from Jamal Lowe to double Swansea City's lead at the Cardiff City Stadium! ⚪⚫

It may have been different if referee John Brooks had issued a second yellow card to Ryan Bennett for a blatant foul on Moore in the first half. Moore tried to stay on his feet and that influenced Brooks who still gave the free kick but not the yellow card the challenge warranted.

Don't have much more to add other than it's now four games against the Jacks where we've failed to score.

Next up Birmingham City come to CCS on Wednesday evening.