Chelsea snatched a dramatic 2-1 victory over Cardiff late on at the Cardiff City Stadium in controversial circumstances on Sunday.

Following a goalless first half in which Cardiff generally frustrated Chelsea and ensured that the visitors could not capitalise on their dominance in possession, the Bluebirds stunned Maurizio Sarri's side within a minute of the second half.

We left it late, but the three points are coming back to London! #CARCHE pic.twitter.com/Kl7db7casW

Cardiff worked a throw-in well, playing the ball inside before Victor Camarasa produced an instinctive effort to bend a Harry Arter cross into the top corner with a stunning first-time finish.

The Bluebirds appeared relatively comfortable in holding their lead with ​Chelsea continuing to struggle in their attempts to break the home side down, but the visitors cranked up the pressure in the final ten minutes. Cesar Azpilicueta, from a clear offside position, pounced on Marcos Alonso's flick-on from a corner to turn home the equaliser on the 84th minute.

The goal stood, but the drama was not over. Neil Warnock was still berating the officials for allowing the equaliser when Ruben Loftus-Cheek headed home from a Willian cross to steal all three points in stoppage time, leaving the Cardiff City stadium stunned.

​Cardiff's performance was some way short of a vintage display of exciting football, but that was never going to be the Bluebirds' approach to facing Chelsea at home. The game demanded a typically resolute, plucky and disciplined display from Neil Warnock's side, and that was exactly what they delivered.

The home side's backline held firm and frustrated Chelsea in their attempts to engineer a breakthrough, resulting in the visitors' passing moves generally breaking down in the final third and forcing Maurizio Sarri's side to unsuccessfully force long passes.

Warnock's side are unlikely to be able to match any Premier League side in terms of technical ability, but their battling qualities and fighting spirit are up there with the best in the division.

That's huge! Harry Arter delivers and Víctor Camarasa guides the ball into the back of the net to hand the hosts a lead!#CARCHE

Wife asked me to put a comedy on, so I've put #CardiffCity match on 

I recommend anyone with insomnia to watch a #CardiffCity match, instant cure  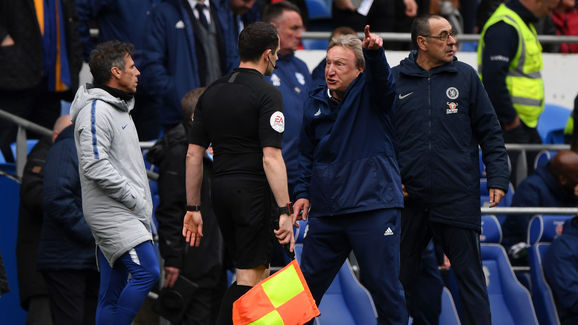 STAR MAN - Much of Cardiff's industrious style of play requires high levels of energy and intensity in central areas, and Harry Arter provided both in abundance on Sunday.

Harry Arter in Bournemouth was a thorn in the flesh. He continues in Cardiff where he left off. High octane player.

Harry Arter is bossing the middle of the park here

Maurizio Sarri made a number of big calls in his team selection on Sunday. The Italian opted to leave star men ​Eden Hazard and ​N'Golo Kante on the bench, whilst also resisting calls to start emerging star Callum Hudson-Odoi.

The team set out with plenty of purpose from the outset in a bid to justify Sarri's selections, as Ross Barkley in particularly looked to drive his side forward from midfield and stake his claim for a more regular place, but the visitors generally lacked a cutting edge in the final third.

Passes all too often went astray in the key areas following patient build-up play, and the Blues lacked a figure in Hazard's mould to unlock the Cardiff backline with that extra level of quality that the Belgian typically provides when selected. Sarri's selection was bold and justified in terms of maintaining freshness, but not so much in terms of making their superiority count.

@ChelseaFC this is already tedious to watch, there is no movement every pass once again is going backwards and the build up play is too slow. We are never gonna win a league playing this type of football. #Chelsea

For a game that we have to win to have any chance for top 4,he leaves our best players on the benchHow can anyone defend this stupidity?Its the usual pass-pass possession with no purpose boring shit.Sarri methods has sucked da life out of the club.He's clueless #Chelsea #CARCHE

Higuaín dropping further back to facilitate play for a lackluster #Chelsea side today.

Chelsea grew frustrated the longer the game wore on without them finding the breakthrough, often resorting to playing long and hopeless balls over the top, and Cardiff's belief that they could keep the visitors at bay grew with each minute. STAR MAN - With Chelsea generally lacking any telling cutting edge in the final third at the Cardiff City Stadium, Ross Barkley was the one who looked most capable of unlocking a stern Cardiff rear-guard with some powerful and purposeful runs from midfield. The attacks generally broke down in the final third as the Bluebirds' defence stood firm, but Barkley provided the visitors' only remote source of attacking inspiration.

Ross Barkley seems set to be the only player likely to emerge from the Chelsea 'Sarriball' era a better player than when he entered it.
I think a lot of that is down to his own personal motivation though & he deserves great credit for that.

Dear Ross Barkley,
We’ll get a new manager who will recognize your talent and let you loose. Amazing comeback from the knee injury. #UpTheBlues #CFC

Cardiff face another huge test next time out in the Premier League when they take on champions ​Manchester City on Wednesday before travelling to face ​Burnley at Turf Moor next Saturday.

It was a performance full of heart from the #Bluebirds - that deserved more.#CityAsOne pic.twitter.com/ndlktoeNGe

Meanwhile, Chelsea follow up their trip to Cardiff with two consecutive home games at Stamford Bridge, with ​Brighton first up on Wednesday, followed by London rivals ​West Ham next Monday.