After settling down to read the messageboard responses to Cardiff City’s 1-0 win over Stoke City upon getting home from the game, it didn’t take me long to come across the first of what I’m sure are many references to us “winning ugly” – my response was to say wistfully to myself “can anyone remember the last time we won pretty?”. 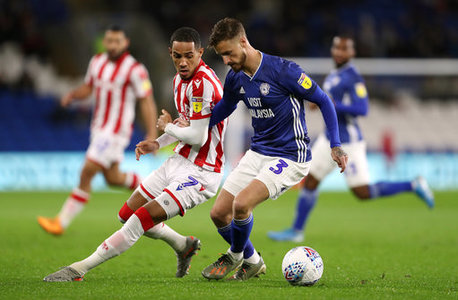 City have won two thirds of their home matches and these wins have included 3-0 and 4-2 scorelines and yet, almost without fail, they have been grim, grinding affairs typified by backs to the wall defending for long periods.

Neil Warnock may have gone, but this was typical Warnock stuff – barely a third of the game in possession of the ball, long spells on the back foot and very little in terms of the thrills and spills that got you interested in the sport in the first place.

However, I do not intend this to be a completely negative piece for the simple reason that any new manager deserves a honeymoon period if you will where serious criticism is allayed for a while on the grounds that the club is going through a transition period where the new man needs to find out about his players and vice versa.

Let’s be fair here, did anyone really think that all of our games under Neil Harris would be as open as his first one was? There was quite a bit wrong with our performance at Charlton, but it all added up to the most entertaining ninety minutes of the season so far as far as I’m concerned.

Our new manager dropped a heavy hint that his second match would be quite a bit different from his first when he talked of wanting a more controlled approach from his team after Saturday’s game.

There was plenty of talk (not least on here!) from supporters about how suspect we were at the back on Saturday and how easy it was for Charlton midfielders to get the wrong side of Marlon Pack and Leandro Bacuna. Therefore, wouldn’t we all be very concerned about our new manager’s credentials if it was to emerge that he had done nothing to try and improve the quality of defending from our back four or the tracking of opposition midfield runners?

It may not have made for enjoyable watching, but City were much better at these aspects of the game tonight than they had been three days earlier and winning ugly or not, the fact of the matter is that this was a deserved win by them.

Of course, going a goal ahead early on is a great help for any side looking to iron out defensive problems because it gives you something to hold on to if morale isn’t great and I don’t think it can have been after a run of two wins in eight games.

Mind you, I will admit that I came out of the stadium not sure if we had won because of greatly improved defending and diligent efforts by our midfield players or because Stoke were simply not very good.

Stoke really are an odd side. As one of their ex jacks, Sam Clucas, was trotting off to be substituted late on in the game with them chasing a reprieve, I asked who the sub was and found out that it was Scott Hogan.who is on loan from Aston Villa following his big money transfer from Brentford a couple of years ago.

Hogan was one of the stand out strikers in the Championship not so long ago and his call up into the Republic of Ireland senior squad came as no great shock, yet he was coming on very late on as the third substitute for a team chasing a goal to get back on level terms.

Yes, Hogan’s star has waned somewhat recently, but I reckon that he would have been out first choice striker tonight if he was on loan to us rather than Stoke. I make it Hogan is one of thirteen full internationals (six of whom were in action against us) in the Stoke squad and, with quality like that at their disposal, as well as uncapped players who are good enough to be very effective performers at this level, you have to wonder how they are in the mess they ate.

Stoke have gambled by keeping the likes of Butland, Martins Indi, Allen and Mame Diouf at the club and under contract and given, the effect that must have on the club’s wage budget, another relegation, this time to League One, would surely be disastrous financially for them.

On this evidence though, it’s certainly not beyond the bounds of possibility that they will go down. For all of their possession, Stoke did very little to bother the City rearguard and all their sixty four per cent share of the ball earned them was an occasional site of goal from a free kick on the edge of the box .

Given their powder puff attacking, it was very hard to reconcile this with the fact that they were coming off the back of successive wins which had seen them score six times.

Stoke passed and passed and passed and the end result of it all was a free kick which Tom Ince put about a yard over the bar in the first half and a promising second half move which was ended by another excellent Lee Peltier block – Neil Etheridge did make a good catch from a cross in added time and there was a routine save from an Ince shot after his first free kick had been blocked about midway through the second half, but this was probably his easiest game since he came back into the first team following his injury.

For all of their failings when in possession on the night, City were still able to look more dangerous than Stoke ever did with Gary Madine coming close to that elusive first goal for City with a stabbed effort from a Lee Tomlin cross that almost beat Butland, Tomlin himself was then twice denied by the keeper and Bacuna, looking for a second goal, saw his well struck shot shot fizz about a yard wide.

Then there was the goal of course which arrived in the tenth minute thanks to Gary Madine’s perceptive and well executed back heeled pass which set Bacuna in on goal and he took the chance with aplomb by lifting his shot over the helpless Butland.

That assist was the highlight of Madine’s evening because, apart from that, he did not reach the standards attained in Saturday’s game as he struggled in particular with the timing of his jumping when contesting high balls. Likewise, Nathaniel Mendez-Laing did not hit the heights seen on Saturday, while Junior Hoilett, although better than he was at Charlton, has, hopefully coincidentally, seen his form tail off under Neil Harris from the levels seen this season under Neil Warnock.

No, it was Tomlin, in for Callum Paterson in the only change to Saturday’s starting line up, who was left to supply what attacking flair we saw from City. As always when he plays for us, we struggled to get Tomlin on the ball, but when we were able to do that in the final third, it invariably caused a problem for Stoke – it was also encouraging to see him last eighty two minutes before being replaced by Will Vaulks, although he it must be said he was out on his feet by then.

Tomlin’s last act before leaving the pitch was to pick up a yellow card for diving which may or may not have been deserved, but it was totally in keeping with the performance of referee Gavin Ward that he saw fit to punish City because he gave us virtually nothing all night – I thought Ward was the worst referee seen at Cardiff City Stadium this season and it was somehow appropriate that such a bitty and ordinary match should be officiated in the downright poor manner that it was.

Neil Harris promised after the match that it will get better under him and I’m sure he knows that it will have to, because home fans were not happy under Neil Warnock despite us winning most of our matches at Cardiff City Stadium. This was too similar to games like Middlesbrough and, to a lesser extent, Luton, but, as I mentioned earlier, the new manager should have time to come up with the improvements he alluded to.

Therefore, I’ll end in positive fashion by saying that, although I find it hard to pin down exactly why it is, I think we do look marginally more dangerous when we attack under Neil Harris than we did under Neil Warnock. For example, would Bacuna have made that forward run for the goal before? Maybe he would have done, but I think what I’m trying to get over is a feeling that we are a little more dynamic in attacking areas under Harris.