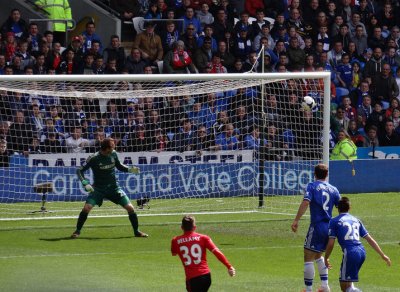 There was to be no final hurrah as Cardiff City dropped from the Premier League with a third straight defeat.

The Bluebirds were already relegated and Chelsea had blown their chance of the title so with little pressure on either side they produced an open game of football.

Chelsea were comfortable in possession and dominated the passing and efforts but they struggled with the killer instinct in front of goal.

They finally did break through with two goals in three second half minutes to win the game.

Cardiff led at half time after Craig Bellamy's shot (pictured) was deflected past Mark Schwarzer. Chelsea continued to look pretty but it took until the 72nd minute before they equalised.

Two substitutions saw the game change. Cardiff had been doing well and keeping Chelsea at bay and with Mats Moller Daehli causing the visitors problems it was a shame to see him subbed for Don Cowie. Chelsea took off John Obi Mikel and brought on Andre Schurlle. Within five minutes Schurlle had levelled and three minutes later Fernando Torres found himself unmarked to make it 2 - 1.

And so endeth a disappointing first season in the Premier League.