Cardiff made it five defeats in five with a home reverse against Norwich to complete a cycle started with defeat at Norwich a month ago. 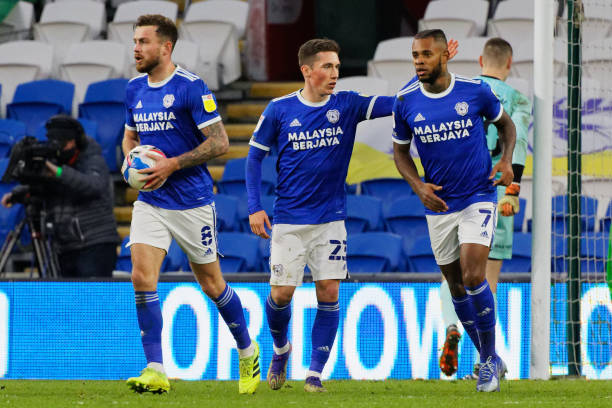 Before kick off Kieffer Moore was named on the bench and then striker Max Watters was revealed as a new signing. The 21 year old from Crawley penning a deal until 2024.

Looking forward to a new chapter with Cardiff City, cant wait to get going! https://t.co/7ZuTj4bfS4

But after 3 mins Cardiff were a goal down and by half time it was 0 - 2 and a struggle. Anyone watching could see the gulf in class.

City pulled a goal back through Joe Ralls but depite a better second half, inflenced by Moore, the sending off of Marlon Pack made it almost impossible and Norwich saw the game through to a comfortable conclusion.

A positive Neil Harris met the press after today's home defeat by league leaders Norwich City. Cardiff were easily second best in the first half before making a better effort after the break.

"I'm really proud of the performance, what an effort by the boys," Harris said after the match.

"What an effort for the 90 minutes, but for the last 25, with 10 men, we went toe to toe with by far the best team in the division.

"I thought there were some outstanding performances in a makeshift back four. I thought Joe Bennett and Joel Bagan were magnificent.

"I thought Joe Ralls, not just his goal but his performance, and Marlon (Pack) was excellent until he got his red card.

"I thought Kieffer (Moore) coming back into the team was outstanding, gave us a real boost and dimension to our play.

"On the whole, it's a massive positive. It might sound crazy we didn't get the point, if not three, we wanted, but that's the level of performance my players have got to have for the rest of the season.

"The application, the attitude, we had on the back of the week we had was first class and I expect more of that and more quality on Wednesday against QPR."

Do you need to beat qpr to keep your job?

"It's a pointless question, asking me that," he replied.

"Were we good enough in the first five minutes defending a corner? No. That's the difference between the two teams.

"Was it a much improved performance? Have I seen application and desire from my team on the training pitch all week? Massively.

“It’s important we judge the game in the right way,” said the Norwich boss. “The second-half we could have made our lives a bit easier but I have to say what we have delivered today in the circumstances is outstanding.

“Today, I just have praise and compliments for the lads. We’ve had a difficult week in terms of COVID-19 cases and we found out one day before the game that we have nine COVID cases, four players and five staff members.

“In addition to that, we had to fight with the flu. Lukas Rupp and Josh Martin both out, Emi Buendia also had some symptoms during this week so it’s been unbelievably difficult.

“In addition to that, several key players are injured. It’s a strange injury for Teemu Pukki but to then come to Cardiff, a difficult place to come, and deliver such a first-half is outstanding.

“It was close to perfect. We were so good, so dominant and so clinical in our situations. We could have easily been up even three or four.

“In the second-half, we dominated further on in the beginning. We conceded unnecessarily and didn’t have too much pressure on the ball, perhaps we felt too comfortable.

“They brought their main striker on, Kieffer Moore, who was buzzing after injury to be back in the game. He’s very difficult to defend against.

“Of course, they sensed blood against us. After a difficult week, we thought whether it was possible if we could have given the game away.

“It was difficult to be absolutely confident but, in these moments, we had to dig in and be there with spirit, togetherness and put our bodies on the line.

“This is what we did, the third and fourth goals could have been possible to make our lives easier. But I have to say, what we have delivered in difficult surroundings is outstanding.”