For the first time since fixtures resumed, Cardiff City looked less fit and less strong than their opponents and paid the price tonight with a 3-2 defeat by an impressive Blackburn Rovers side who were well worth their win. 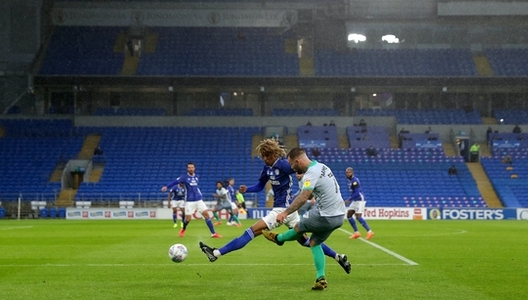 City could complain about their luck in respect of having to face a side who knew nothing but a win would keep alive their Play Off hopes and Blackburn played like their season depended on the match – they put an awful lot into it, with an energetic high pressing approach which certainly unsettled the home side.

Furthermore, although they really didn’t need it given their almost complete domination of the second half, nearly every decision and roll and spin of the ball in the second forty five minutes went Blackburn’s way.

Yet, while there could be no disputing the fact that the right side won, Blackburn would not have done so without a series of errors by players who have done so well recently that contributed greatly to the visitors’ goals.

When Cardiff were good they were very good, as evidenced by their goals which both in different ways illustrated their new more footballing approach. I also thought Robert Glatzel looked a very good Championship centre forward because we were playing more to his strengths, but, apart from him, we were struggling all over the pitch really from about the twenty minute mark onwards.

The fact is that Tony Mowbray sides have generally always tended to play in a way that is about getting the ball down and playing in a progressive manner and while we have been trying to incorporate some of that style recently with surprisingly good results, we were simply up against a team which was better at it than us because they have played it more often and for longer than us.

Tellingly, City were reduced to knocking it long and hurling long throws in Warnock style as the minutes ticked towards ninety, but it is a curiosity of post lockdown football, that our former strength has, it seems, disappeared – we’ve just not been anywhere near as effective from set pieces or aerially in an attacking sense, since football restarted.

Blackburn should really have been ahead inside ten minutes when their right back Ryan Nyambe blazed a wonderful Adam Armstrong cross over the top from point blank range under pressure from Joe Bennett, but City gave as good as they got in the first quarter of the game and might even have just deserved it when they went in front with a wonderful goal

It arrived on seventeen minutes and was their best of the season so far for me as the man who is usually the furthest forward of the midfield trio, Joe Ralls, picked out a forward run by Will Vaulks with a perceptive pass from the halfway line, but it was what the man who is often the deepest lying of the three who then provided a moment of sheer quality.

Vaulks’ run had taken him into a promising position. but no one could have been expecting what happened next as he met the ball with the outside of his right foot to send it quietly over keeper Christian Walton and into the net via the crossbar.

Unfortunately, just as at Preston, tonight was an occasion where the lead given us by the so called all important first goal was handed back almost immediately.

I’m afraid Dion Sanderson has to shoulder a great deal of the responsibility for what happened with Danny Graham’s equaliser. The young full back, on loan from Wolves, has, rightly, received a lot of praise for his performances in a City shirt, but he does make the occasional cheap mistake and here he, first, lost Armstrong as the Blackburn playmaker pursued a long ball forward and he would have been in on goal with a better first touch. As it was, Sean Morrison was able to clear up the situation at the expense of a corner, but then Sanderson compounded his error by being caught flat footed from the flag kick as Darryl Lenihan got clear of him to hit the post with a header – the ball then bounced off Alex Smithies which meant that Graham was not offside when he tapped in from point blank range because it had gone backwards off a City player.

After that, the visitors, with their greater strength and athleticism, tended to hold the whip hand and while not suggesting a second goal was imminent, they were clearly taking charge.

However, the closest we came to another goal before one did arrive was when Glatzel, Ralls and Junior Hoilett temporarily reversed the trend of the game by winning individual battles to set up a volleyed chance for the last named which beat Walton but flashed wide of the far post.

Therefore, it was not a complete shock to see Blackburn trailing at the interval and credit should be given to City for the quality of the goal they came up with to earn their 2-1 lead.

It came on forty one minutes and owed a great deal to the fit again Josh Murphy who had not really been involved until then. He first got away a shot from twenty five yards out that Walton dived to keep out and then, seconds later, combined with Ralls to neatly slip in Joe Bennett whose cross was turned in by Robert Glatzel for the sort of goal City just didn’t use to score.

I doubt it, but maybe the second half would not have turned out to be such a one sided affair if City had not once again allowed their opponents back into the game so quickly – this time with an equaliser within barely a minute of the restart when Armsrtong’s deflected cross was volleyed in by Dominic Samuel who had reacted quicker to the situation than Bennett.

Samuel would have had a second goal ten minutes or so later, but for the vigilance of Smithies and, another Murphy shot from distance which Walton turned away apart, I cannot think of another time when a player in blue looked like scoring when they were playing towards the Canton Stand. Indeed, the only threat the Blackburn goal faced after that was one of their own making when centre back Tosin Adarabioyo nodded on to the top of his own net with a concerned Walton back pedalling.

The game was decided with twenty minutes left with a goal which would have left one manager spitting feathers and the other purring as to the quality and audacity of the finish.

For me, Leandro Bacuma has probably been City’s best player since the lockdown, but here I’m afraid, he lost a great deal of the credit he had built up with a tired and careless looking pass into the path of Armstrong, stood alone some forty yards from City’s goal, who then produced a one touch lob over the helpless Smithies which never looked for a second like it was going to end up anywhere but the back of the Cardiff net.

It was a piece of skill fit to win any game, but it had been handed to the player in the Blackburn team most likely to come up with something like that on a plate.

City threw on subs Paterson, Tomlin, Ward, Whyte and Pack to no effect although the second named was the victim of an ugly tackle by Blackburn’s impressive, but, on this evidence, niggly Lewis Travis which could have earned him a red card, but such was the home team’s lack of oomph by then that I very much doubt if it would have had an effect on the outcome if the visitors had been reduced to ten.

City’s decidedly odd home record whereby the only two sides they have beaten at home in league and cup since before Christmas are the ones who are big favourites for the two automatic promotion spots continues then and it must be said that the two worst performances since the restart have come at Cardiff City Stadium.

Therefore, Derby go to West Brom tomorrow knowing a win will draw them level on points with us while a Swansea victory win at Birmingham and three points for Millwall at the New Den against over Middlesbrough (certainly possible on current form) would see both those sides close to within a point of us.

City will need to be much more up for the fight in terms of strength and physicality to get anything from a Fulham team that, with their Harry Arter inspired win at Forest, have three victories to show from their trio of games where they had to do without top scorer Aleksander Mitrovic through suspension – what was beginning to look like serene progress into the Play Offs following the win at Bristol on Saturday is going to be nothing of the sort I’m afraid!