It’s got so bad with Cardiff City at home now that a 3-2 loss seems to be almost akin to a win. That may sound ridiculous, but when you’ve found goalscoring as hard as we’ve done at Cardiff City Stadium since September, you do take solace in those two goals and there was also the bonus of a first home goal in the opening half as well. 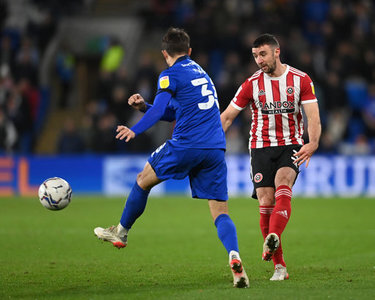 When all’s said and done though, it’s an eighth loss in eleven home league games and the fact that we got a win and a draw from the first two only emphasises how desperate the situation is as far as our chances of getting clear of the relegation zone is concerned.

Away results are perfectly acceptable with the number of wins matching the number of losses, but we can continue a run of two wins and a draw on opponents grounds for weeks and months to come and we won’t get the outcome those results merit if we’re going to be losing at home every fortnight.

Today was a frustrating loss because we had ridden our luck early on and improved as the first half went on to get a very rare 1-0 lead and then were playing well, as well as I’ve seen us this season in fact, in the opening stages of the second to get me at least hopeful of us getting the second goal we would need to record a win given our chronic inability to keep clean sheets.

The game turned on the red card shown to City captain Sean Morrison on fiftythree minutes when he bought down thirty five year old Billy Sharp as he was racing in on goal. Even City manager Steve Morison acknowledged that the red card shown by referee was a fair one – Morrison was clearly the last man and he definitely meant to bring Sharp down – having now seen the incident on video, as opposed to nearly a hundred yards away at the ground, it doesn’t look good for our captain who allowed the veteran to get the wrong side of him and then run in behind him.

As soon as the visitors had wasted the resultant free kick, the predictable introduction of Aden Flint was made. What wasn’t predictable to me at least was that it was scorer Mark Harris who made way, not Isaak Davies. I say that not because the young forward was playing poorly, more because I’d grown used to the youngster always being withdrawn under Mick McCarthy’s management and I just expected the same from Steve Morison – it’s a sign of how highly our manager seems to rate Davies that he was kept on for a while longer at least.

For me, it was the Harris and Davies combination that was giving me hope that we could have made it four wins from our last five, but, as we were leading at the time, I’d say the only other possible candidate to be replaced was James Collins and although Morison is showing himself to be quite a brave and original thinker, that would probably have been a step too far – although it was the change that I, as someone who knows they are never going to be in a position to make such decisions, would have made!

In the event, a Sheffield team that had looked impressive in midfield and down the flanks, but a little powder puff up front soon bared their teeth to score three times in fifteen minutes.

The game was as good as over by then, but a goal back from City on ninety minutes made for a more exciting four minutes of added time than I was expecting, only for the visitors to see things out for a deserved win.

Whether it could have been different without what seemed a strange City selection is a matter for debate although Steve Morison said after the game that both Keifer Moore and Rubin Colwill had both picked up injuries in training.

The fact that Moore was brought on, along with Will Vaulks, for Collins and Davies for the last half an hour of the game does beg the question as to why he was considered fit enough to be used but not to start, but I suppose you have to accept what our manager says. However, with a period before Christmas where we’re only playing one game a week, you’d like to think We would be selecting what is considered our strongest team in every game and, for me, Moore and Colwill would always be in that – given our lack of what tends to be called an x factor up front, any game where Colwill doesn’t appear when he’s fit enough to sit on the bench has to be seen as a missed opportunity..

Moore and Colwill were the only players from the starting line up last week to be left out, but it was at the back where we looked off the pace early on. Sharp twice missed the sort of chance you’d back him to score normally and Conor Hourihane shot over from a corner played to the edge of the penalty area.

To be honest, it was all a lot like the opening stages of so many of our recent home games where you found yourself thinking that it was only a matter of time before the visiting side scored.

More by luck than judgement, City were still at 0-0 at the half hour mark this time though and they went on to have the better of things after that until the break.

Indeed, it took a fine save from Wes Foderingham to keep out a deflected Curtis Nelson header from a Joe Ralls corner and a few minutes later, City’s longest serving player showed the creativity he is accused of lacking by some critics by scooping a superb pass into Harris’ path who finished tidily from eight yards.

Davies whose pace inconvenienced the United defence at times had a shot turned away on his near post by Foderingham seconds later following an impressive slaloming run by the youngster and City went in at half time ahead for the first time at home this season and feeling quite good about life.

That carried out into the second half with City, with Davies again to the fore, playing the sort of quick, neat football that I’ve despaired of ever seeing from them as we’ve battered our way through the last few seasons.

Just for a while, the home crowd had a hint of what may be to come if enough of the younger players can kick on into genuine first team contention and if Steve Morison keeps up with the current desire to pass the ball more and better, but we were never to find out if City could maintain the standard to which they were playing as the game changed completely with the Morrison red card.

My own view is that we’re something of a hybrid with about half of the side happier playing in the “new way” and the rest, understandably, more comfortable with the method that has been the way they’ve done things throughout their time at Cardiff until the recent changes. Therefore, I feel we would have struggled to maintain the standards we were showing for that short spell, but it seems like a bit of a positive that I find myself wondering if I may be wrong in thinking that.

As it was, the game became more like attack v defence and, just before the equaliser, Perry Ng I think it was smashed a ball upfield just to clear the pressure. This struck me as being the sort of thing you might do at 1-0 up with ten men in the eightieth minute, but when you’re doing it in the around the hour mark you’re in trouble.

Sure enough, soon afterwards, Morgan Gibbs-White one of a few ex Swansea players in the Blades line up scored a goal that lived up to his big reputation when he curled in a shot from twenty five yards which left Alex Smithies with no chance.

By this season’s standards, getting beyond the hour mark without conceding was one of our better efforts, but, having let one in, we reverted to type and two goals in two minutes left us with a huge mountain to climb with a quarter of an hour to go.

Gibbs-White played a big part in the first of these goals as his pass left Sharp with a simple finish and then the sort of break that was always going to be on once we’d fallen behind, saw David McGoldrick find the net with a shot that got a bit of a deflection off the desperately covering Nelson.

Moore’s header forced another decent save from Foderingham, but McGuinness’ looping header from the resultant corner halved the deficit even though it was all to no avail in the end.

So, for now, we’re in a position where the appointment of Steve Morison would appear to have had little impact on our home results and defensive deficiencies, but he has got us scoring goals again and picking up points away from home. Therefore, it seems to me that were in a position similar to a team that are on a run of draws and it all depends on how we come out of it. Win a few and and you’re on a long unbeaten run, lose a few and you’ve gone ages without a win. Our previous home game with Hull was a big opportunity missed, but, if it goes wrong against Derby in a fortnight, you can change the word big to huge.