When a limp, listless and lifeless Cardiff City were deservedly beaten 1-0 at Coventry six days ago, they faced the prospect of two home matches against sides in mid table positions (albeit higher than them) to try and get themselves in better order before they embarked on a run of five matches in six against teams that have started their seasons with a real statement of intent that they are serious promotion contenders. 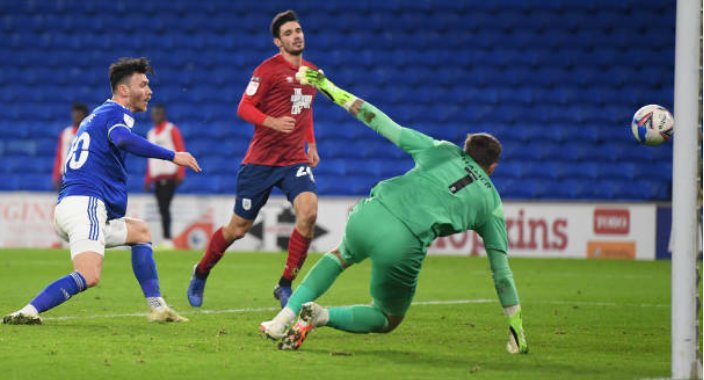 When the fixtures for this season were released, Luton and Huddersfield at Cardiff City Stadium within three days of each other will have looked like an opportunity to record very rare back to back wins in one of those increasingly common pairs of Saturday/midweek or midweek/Saturday clusters of matches which make up so much of the Championship season.

City have generally been pretty ropey at getting six points from these games down the years and given the fact that confidence was so low following a run of one win in eight games from a side their supporters had been anticipating another top six challenge from and that they only won one of the first six home matches (three of which were lost), it was clear to see why the metaphorical vultures were circling around manager Neil Harris.

Well, with Luton dispatched 4-0 in the first of the two encounters which may possibly have seen Harris lose his job, the pressure had certainly lifted on the City boss, but not completely. That one home win I mentioned earlier had been another big one, 3-0 over Barnsley, but that had been the single victory in that run of eight matches I mentioned earlier. As such, it was a source of frustration as much as anything, because it showed what we were capable of, but remained a distance above the standard of performance that had been the norm in 20/21.

The challenge facing City tonight against Huddersfield was twofold, do not allow another Barnsley follow up situation to develop whereby things slipped back into their bad old ways and, second, ensure that the team would go into a run of matches that might well define their season in a much better frame of mind than seemed possible last Wednesday.

It’s fair to say that City managed this as they brought their tally of unanswered goals to seven in their last two matches with a comprehensive 3-0 win which may not have quite hit the heights seen on Saturday, but was, in some ways, more impressive.

I say that for a few reasons, first, Huddersfield had plenty of possession (sixty seven per cent according to the BBC) and made a strong start to the second half as they pushed us back for ten minutes or so. However, we responded with calm and organised defending which meant that we were never in serious danger of being opened up. Second, although set piece goals certainly have their place in any season where City enjoy a degree of success, scoring three goals from open play, even if one of them was an absolute gift from our opponents, is reassuring at a time when it seems to me we have reverted, to a small degree at least, to our Warnockball roots – I’ll make what I mean there more clear shortly.

Thirdly, and finally, two more goals from Keiffer Moore to take his tally for the season to seven offers the hope that we may finally have found a striker who can move us on from the days when we have been viewing ten goals in a season as a good return for one of our front men – that’s not to say I’m expecting our new striker to hit the twenty mark or anything like that, but, injury permitting, he’s on his way to allowing us the rare luxury of having a Cardiff player near the top of the Championship goalscoring charts come May.

Just a few words now about my earlier Warnockball reference, it was made only semi seriously. Neil Harris remarked after the Luton game that we had been a bit more direct than in recent matches, this was partly down to the type of team we were playing apparently (the same would have been true tonight) and I would say the movement and willingness to run the channels shown by Mark Harris has almost forced us into knocking early balls to him.

There was a telling comment in the commentary tonight (the commentators on the club website have their critics, but I must say that I think they do a good job and the addition of another knowledgeable and interesting guest in new Academy appointee David Hughes was a welcome bonus tonight) that Neil Harris tends to go with the Joe Ralls, Will Vaulks combination in central midfield in games where the opposition are expected to have a lot of the ball and brings in Marlon Pack for matches where we expect to have more possession.

There was a bit of a dogs of war mentality behind Ralls and Vaulks tonight as the free kicks given against them mounted up. In their defence, we had our first Premier League ref of the season in charge of a game tonight – Kevin Friend is someone who I’ve never been too bothered about when I see he is to take charge of one of our matches, but tonight he penalized us nearly twice as often as he did Huddersfield and I thought there were a few against us which certainly fell into the dubious category from him.

Anyway, Ralls and Vaulks were instrumental in showing that the much maligned 4-4-2 system still has a place in the modern game, especially when the wide players do such a good defensive job when the opposition are dominating possession as Harry Wilson and Sheyi Ojo did tonight.

More than in any other game since I’ve had to change my seat in the ground for the one in my computer room at home where the view of the pitch differs so much from what I’m used to, I was struck by the amount of disciplined defensive work our wingers were putting in during that period when Huddersfield briefly got on top. Wilson and Ojo were part of an organised and confident two banks of four which made it so difficult for the visitors to penetrate when they were pressing for an equaliser after half time.

Unlike some wing combinations we’ve used in recent years, Wilson and Ojo were able to display their ability up the other end of the pitch as well – in the case of the former, it was in the form of a succession of quality crosses when we were enjoying our best spell of the game in the quarter of an hour before half time, while the latter was able to add a couple more assists to the good one he came up with in the build up to Harris’ goal on Saturday.

Ojo’s long run down the left touchline on thirty five minutes ended with him playing a low ball to the near post where Moore got ahead of his marker to give City a deserved reward when they were playing well and there could have been further goals during that spell as the visitors struggled to cope with our physicality, urgency and quality.

The second goal came midway through the second half at a time when City were just beginning to reestablish themselves after Huddersfield’s strong spell.

Such is the determination of some sides to build from the back that they’ll occasionally have a nightmare moment or two and present their opponents with a goal. That’s exactly what happened tonight as Ben Hamer rolled the ball to centreback Naby Saah who was immediately put under pressure by sub Junior Hoilett, who had just come on for Harris. Hoilett was able to get the ball off Saah and from there a goal was inevitable as he played it to Moore who couldn’t miss from six yards.

The icing on the cake was a fine late goal by sub Robert Glatzel as he received a pass from Ojo, side stepped the last defender and fired an unstoppable shot high into the net from just inside the penalty area. It was the German’s first goal in sixteen games and, although that stat wasn’t really as bad as it seems because so many of those appearances were as a sub, it will still be a relief for him to have got off the mark this season. You can never have enough strikers with the confidence a recent goal gives them and I’m guessing it’s been some time since we had three of them.

Neil Harris made full use of his substitutes in the remaining minutes as City maintained their perfect record in matches in which they score first (played five, won five, goals for thirteen, goals conceded none), but you have to assume that is not a sequence we’re going to maintain in our upcoming run of fixtures – Watford A, Stoke A, Swansea H, Birmingham H, Norwich A, Brentford H.

However, what is encouraging is that we’ll begin this testing run of games, in front of a crowd of around a thousand at Vicarage Road on Saturday, in a far better place than would have seemed possible after Coventry – the pressure will be right back on our manager if we revert to the general form of our first thirteen matches at Watford and Stoke, but our last two games really couldn’t have gone better for him.