Cardiff led Liverpool twice before succumbing to a 6 - 3 home thumping at the hands of the Merseysiders.

Jordon Mutch gave City the lead inside ten minutes before Luis Suarez levelled. Fraiser Campbell restored Cardiff's advantage but the visitors were level at half time with Martin Skrtel finishing from close range to make it 2 - 2 at half time. 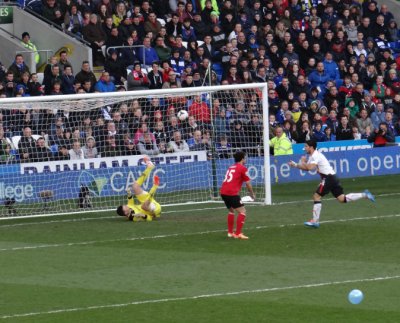 Cardiff fell behind in controversial circumstances early in the second half. Suarez took a free kick and the initial shot and subsequent rebound cannoned off two Cardiff players before going out for a corner.

Kevin Theophile Catherine needed treatment but Jordon Mutch was soon on his feet without being seen by the Cardiff physio. He was asked if he was OK by the Liverpool medic who had run on because two players were down. The referee though insisted both Cardiff players went off to the touchline. That left Cardiff with just nine players on the pitch and Liverpool took advantage to score with Skrtel scoring in his second goal.

Mutch should never ever have left the pitch. The referee just shrugged his shoulders and awarded the goal. Another one for the big team.

Cardiff's heads visibly dropped and City were punished two by the pace of Liverpools counter attacking. The SAS, Suarez and Daniel Sturridge both scored to seemingly put the game to bed. They set each other up for their goals with both strikers finishing smartly inside the box.

With the score at 5 - 2 Liverpool looked to see the game out but Cardiff came back and Jordon Mutch scored to make it 5 - 3. City tried to rattle the visitors but Luis Suarez shrugged off Jun Cala to run free into the box, Raheem Stirling was on hand for a tap in but Suarez finnished himself to claim the match ball.

This was a match that Cardiff were not expected to win. Thankfully the rest of the bottom five all lost.

Cardiff now have a 7 games left this season. The next six are against teams in 8th place or below with the next two games away at WBA and at home to Palace. Two matches that Cardiff really need to win if they want to keep up a decent chance at survival.