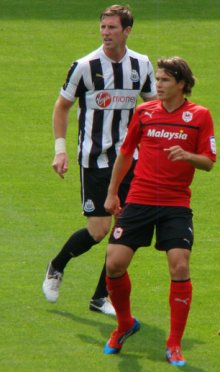 A crowd of over 9,000 turned up for the game with fans wearing blue and red shirts.

Cardiff ran riot in the opening half an hour. Aron Gunnarsson cracked a half volley past Tim Krul, Joe Ralls made it two before Gunnarsson found the net again to make it 3 - 0.

The second half started with Newcastle pulling a goal back. Shola Ameobi scoring from the penalty spot past David Marshall.

But the three goal cushion was restored when new signing Etien Velikonja (pictured) held off the Newcastle defence to score his first ever goal for City.

There was no Craig Bellamy in the side yesterday but he was there watching. Craig is expected to make his first appearance on Friday when City kick off the new league season against Huddersfield.

Before that Cardiff are away at Northampton in the Capital One Cup on Tuesday evening.