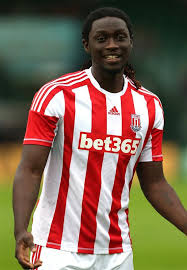 Cardiff and Stoke are trading strikers. A swap deal has been agreed that will see Kenwyne Jones sign for the Bluebirds with Peter Oedemwingie moving to Stoke.

Ole Gunnar Solskjaer addressed the Jones/Odemwingie swap after the FA Cup win at Bolton, saying: "There is potentially a deal to be done with Peter going to Stoke and Kenwyne coming to Cardiff.

"We cannot confirm anything until the medicals are done, but we are quite a long way down the road.

"I can't say anything about other players, but I can talk about Odemwingie and Jones because Stoke have issued a statement."

The statement Solskjaer refers to was on the official Stoke website. It reads:

STOKE CITY can confirm it has reached an agreement with Cardiff City over a move for striker Peter Odemwingie that will see Kenwyne Jones head to South Wales in a player-exchange transfer.

The deal is subject to both players passing medicals and agreeing personal terms but the Potters hope to conclude their move for the Nigerian international over the weekend.
Oedmewingie has failed to shine at Cardiff since his deadline day move in August while Jones appears far from happy at The Britannia. Therefore this deal might suit all parties.