Cardiff are going to Wembley 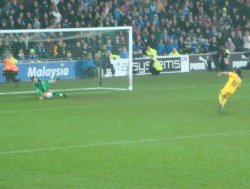 The game finished 1 - 0 to Cardiff after 120 mins. And City won 3 - 1 on penalties as Palace failed with three of their four efforts.

Cardiff will face either Liverpool or Man City in the Carling Cup final on Sunday February 26th, ko 4:00pm.