Joe Ralls, Nathaniel Mendez-Laing and Robert Glatzel score the goals that lift Cardiff above Preston into the play off places. 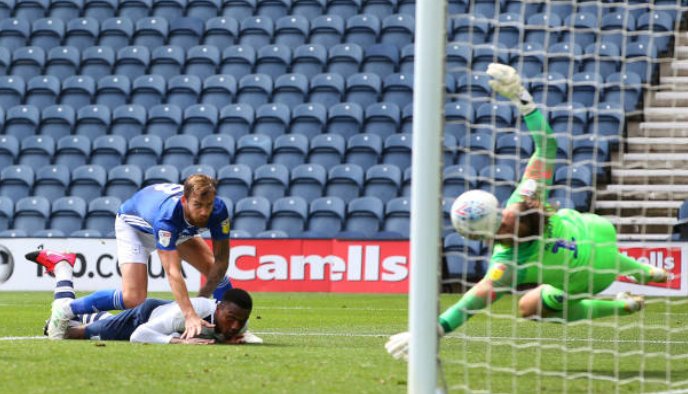 A slow burner of a game burst into life during a second half that saw extremes of weather as bright sunshine was washed away by a tropical downpour that left puddles on the pitch and reduced visibility. The rain added to the drama as City settled the game with Robert Glazel's 91st minute deflected goal proving too much for Preston who were throwing everything towards the Cardiff goal to attempt to rescue something from the game.

Cardiff, for a change, did well in keeping possession but neither side really threatened until Joe Ralls (pictured) broke the deadlock in the 69th minute. After Junior Hoilett's free kick was blocked Dion Sanderson crossed perfectly for Ralls to head City into the lead.

It didn't last long as Preston levelled through Daniel Johnson 4 minutes later. But Cardiff upped the quality of their football and a smart move between Mendez-Laing and Lee Tomlin saw NM-L burst through on goal to restore City's lead before Glatzel rounded off the victory scoring as the heavens opened.

Preston continued to press during 7 added minutes but City splashed and dashed their efforts leaving the Bluebirds to face a happy journey home from Deepdale for a change. City move above Preston into 6th place just 1 point behind Forest who play tomorrow.

Elsewhere Swansea lost at home to bottom side Luton and our next opponents, Charlton (Tues 6pm) won again as they beat QPR.