Brighton maintained their impressive start to the season to advance in the Carabao Cup and inflict Cardiff's first loss of the campaign. 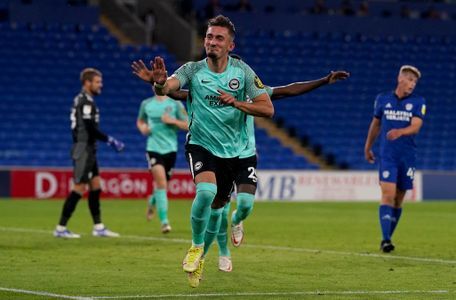 Andi Zeqiri also opened his account for the Seagulls in the second half as a much changed Brighton overcame the Championship side.

Cardiff had chances with a James Collins header hitting the crossbar.

Brighton, enjoying their best ever start to a top-flight season after two wins from two, made 11 changes to the side that started in the win over Watford.

Cardiff made eight changes with Sam Bowen and Tavio D'Almeida handed competitive debuts and Mick McCarthy's side made a positive start to the game.

But it was the visitors who took the lead against the run of play after nine minutes as Enock Mwepu's finely threaded through ball from Brighton's half found the advancing Moder, and the Poland international coolly slotted past Alex Smithies.

Cardiff's response saw Perry Ng's shot deflected over while Aden Flint, Cardiff's top scorer with four goals, headed wide from a corner while Zeqiri could have doubled Brighton's lead but he fired wide.

The home side were dealt a blow just after the half-hour mark when skipper Sean Morrison was forced to leave the field and replaced by teenager Oliver Denham, who came on to make his debut.

Collins had a half chance for Cardiff two minutes after the break but his header was saved by Jason Steele but as Cardiff pushed for a way back into the game, debutant Moises Caicedo fed Zeqiri, who slotted into the bottom left hand corner of the net.

Collins' header from Josh Murphy's cross struck the crossbar late on but Brighton had by then done enough to seal victory.