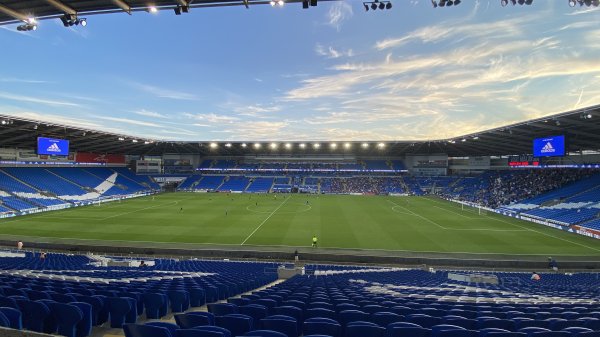 Things didn't start off according to plan as Sutton broke from one end of the pitch to the other with David Ajiboye getting past debutant left-back Tom Davies and setting up Donovan Wilson to give the visitors a 4th minute lead.

A Cardiff side that included Smithies, Morrison, Nelson, Flint, Vaulks and Kieffer Moore struggled to contain the new EFL side and a smart save from Alex Smithies kept the score at 0 - 1.

Before the game it was announced that Marley Watkins had been given a contract until the end of the month and just before the break he scored a goal on his debut. His effort from the edge of the box straight at Dean Bouzanis but the Sutton keeper fumbled and the ball popped through his hands into the back of the net.

Five minutes into the second half and Watkins had his second. This time a quality curling finish from outside the box into the right hand corner. Cardiff led 2 - 1 and looked more in control of the game without creating too many chances. One effort from Moore went just over.

It took until the final few minutes for City to look like they had made the game safe. Substitute Josh Murphy chased Tom Davies' superb long ball and after one touch to take it down out of the air Murphy continued in his stride into the box and made space to fire City into a 3 - 1 lead.

But the drama wasn't over. A goalmouth scramble on 90 mins saw Sutton pull one back through Coby Rowe and in added time they almost snatched an equaliser. Cardiff could have regained the two goal lead but a cheeky quick free kick that caught Sutton out was fluffed when a ball to James Collins was misplaced and the chance was lost.

That was the last action as moments later the referee thankfully blew the final whistle.

Cardiff are into Wednesday night's draw for round 2.