Cardiff moved within three points of the Championship play-off places and maintained Mick McCarthy's unbeaten start as manager with a 4-0 thumping of Preston. 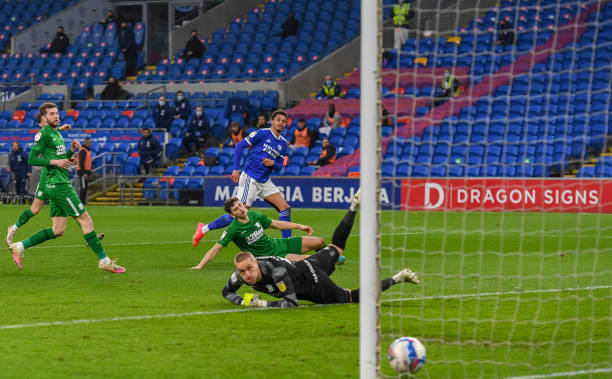 Kieffer Moore's early penalty and second-half strikes from Josh Murphy, Marlon Pack and substitute Mark Harris earned the Bluebirds a fourth successive victory to take them within touching distance of the top six.

Cardiff goalkeeper Dillon Phillips crucially saved two penalties in two minutes to deny the visitors a route back into the game and condemn them to a fourth defeat in five matches.

Former Bluebirds defender Greg Cunningham and Emil Jakobsen came into the Preston XI in place of Tom Barkhuizen and Scott Sinclair, but they were powerless to stop their side getting off to the worst possible start against the unchanged Bluebirds.

Cardiff goalkeeper Dillon Phillips was the hero for the Bluebirds after he saved a Preston penalty, and when another was awarded for a foul in the rebound, he saved the next spot kick!

Only 56 seconds had elapsed when Jordan Storey made contact with Sean Morrison instead of the ball with an attempted clearance, and referee Jeremy Simpson pointed to the spot.

Moore stepped up to take the penalty and found the top corner to give Cardiff a second-minute lead with his 14th league goal of the season.

McCarthy's men began the second half in the same vein as the first as they struck quickly again to put the game beyond the Lilywhites.

Harry Wilson sprung to life after the restart to win the ball from Ben Whiteman before driving towards goal and finding the run of Murphy.

The forward, who had found game-time hard to come by under Neil Harris, rewarded his new manager's faith by taking the ball away from Storey and finding the bottom corner after just 39 seconds of the second half.

Neil's side had two golden opportunities to get themselves back in the game, but Phillips made himself the hero by saving two penalties in two minutes.

The first came when substitute Anthony Gordon went down in the box after colliding with Wilson, but Phillips dived to his right to keep Paul Gallagher's kick out.

The penalty-taker raced to recover the rebound only to be hacked down by Aden Flint, who fumed as Simpson awarded his third penalty of the afternoon.

Ched Evans this time took responsibility, but the end result was the same as Phillips made another reaction save.

And Cardiff made them pay as they went down the other end in the 71st minute to wrap up their fourth straight win.

Sheyi Ojo pounced on a mix-up between keeper Daniel Iversen and Liam Lindsay and crossed for Moore, who had his header saved by Iversen but the Preston 'keeper was powerless to stop Marlon Pack from finding the net with a follow-up.

Lindsay was at fault again seven minutes later when his back-pass was cut out by Harris, who calmly finished to complete the 4-0 rout.