Three people encroached onto the pitxh during City's defeat at home to Brighton on Tuesday. One of them just to get selfies with the players while himself half wearing a mask. All three were rounded up by the stewards and have been reported to the police. 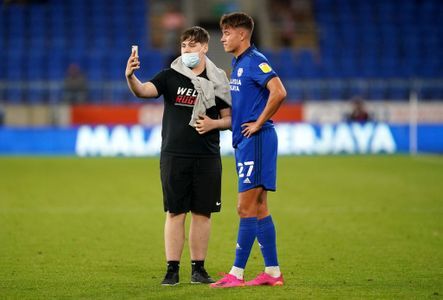 A statement from the club reads:

All three individuals have been reported to South Wales Police and the Club is preparing an impact statement that will support those individuals being charged under the Football Offences Act (1991).

It is of paramount importance that the playing arena remains a safe area for players and officials; it is a criminal offence to enter the field of play or the area adjacent to it.

The actions of the three individuals who committed offences on Tuesday evening will likely result in convictions, fines and three-year Football Banning Orders administered by the courts.

As part of this process, the Club will also be applying for costs to cover expected EFL sanctions and increased ongoing security charges.

Cardiff City FC would like to thank the vast majority of its supporters who abide by the Club’s ground regulations (click here for reference) and support the Bluebirds with the best will and intention.