Any result for Cardiff today against free scoring and title contenders Liverpool will be seen as a shock. 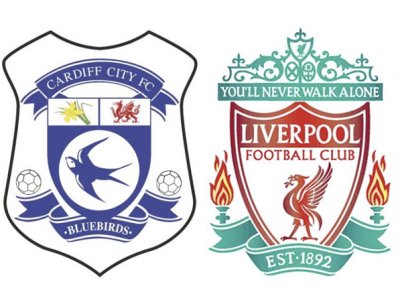 The Bluebirds are going to need to pull results from somewhere though as we have just eight games of the season remaining with Cardiff in the bottom three.

City were cruelly denied a point at Everton last weekend. Can they take something from the red side of Liverpool this weekend?

They will have to keep the SAS (Suarez and Sturridge) strike partnership quiet and also Cardiff need to score goals. While Liverpool find the net at will, Cardiff struggle to create the chances that will give them a hope of winning games.

This is one of the most anticipated games of the season at CCS with lots of 'local' Liverpool supporters likely to finaly see their heros (sic) playing in South Wales.

Liverpool manager Brendan Rodgers has no new injury concerns ahead of the trip to struggling Cardiff.

He will select from the same squad which defeated Manchester United 3-0 at Old Trafford last weekend and there are likely to be few changes to the starting line-up.

Midfielder Lucas Leiva and Mamadou Sakho both returned to the bench for that game after long lay-offs and will be included again in south Wales.

Cardiff will continue their fight against relegation from the Barclays Premier League when they host title-chasing Liverpool on Saturday.

Bluebirds manager Ole Gunnar Solskjaer has pretty much a fully-fit squad to choose from, with Cardiff encouraged by last weekend's performance at Everton, when they succumbed to an injury-time goal.