Can Cardiff stop title chasing Liverpool at CCS? Could today be the day we get a result against a top six side. Our record is P 10 L 10 so far this season. Liverpool could be Premier League winners and Champions League winners in a few weeks time so the odds are against Cardiff, but shocks happen. Let's hope today is one of those days

Liverpool have no injury concerns ahead of their Premier League trip to Cardiff on Sunday but Alex Oxlade-Chamberlain is still unavailable.

Dejan Lovren is expected to return to the group after missing the midweek Champions League win over Porto through illness. 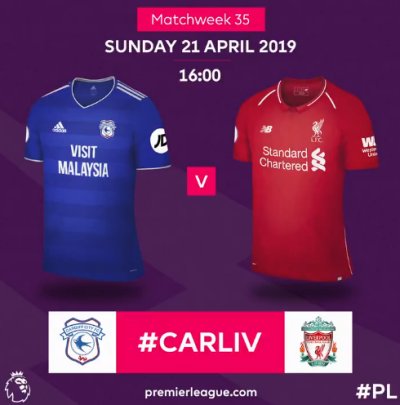 Harry Arter, who missed Tuesday's 2-0 win at Brighton with a calf strain, will be absent again but Cardiff hope the Republic of Ireland midfielder will be back for next weekend's trip to Fulham.

Aron Gunnarsson faces a late check after being forced off at Brighton with a back spasm, and fellow midfielder Leandro Bacuna stands by to replace the Iceland international following his impressive midweek second-half performance.