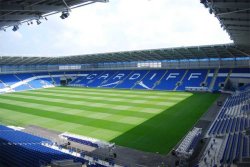 When the fixtures were released in June one of the first that fans looked for was when Cardiff would play Manchester Utd. Whether you like them or not United are the current Premier League Champions and one of the biggest clubs in the world.

The Red Devils come to Cardiff as red hot favourites to beat Cardiff with Robin Van Persie as low as 3/1 as first goal scorer. The establishment give City little chance but they didn’t give us much hope against Man City either and look what happened there.

It’s a big week for Cardiff with Arsenal coming to CCS next Saturday. Any points gained from these games will be a bonus. The way some results have gone in the Premier League this season will give City encouragement. Don’t write Cardiff off. The atmosphere at 4pm on Sunday will be red hot and Cardiff will put their bodies on the line to try and upset United.

This is a Man Utd side in transition after the departure of Alex Ferguson. David Moyes has seen a mix of results including a home defeat to West Brom but since then they are unbeaten in five in the League.

A week before his 40th birthday Ryan Giggs returns to his home town for the first time in a League fixture. While he may have upset Welsh fans with his absences from international games there’s no denying his status as a Premier League legend.

The match is live on Sky Sports and will be beamed around the world. Let’s hope that little old Cardiff City will be making headlines again and sending David Moyes and his troops home empty handed.

Cardiff striker Peter Odemwingie has recovered from a minor muscle injury, while Aron Gunnarsson is fit despite hobbling off for Iceland on Tuesday.

Andreas Cornelius, sidelined since August by an ankle injury, is also fit.

The Dane has been sidelined for 10 weeks since suffering the injury in the Capital One Cup tie against Accrington, but he featured for the Under-21s last week and is available to face the league champions.

Manchester United are without Michael Carrick and Phil Jones because of respective Achilles and groin problems.

The Red Devils will assess strikers Robin van Persie and Danny Welbeck, both of whom withdrew from international duty because of injuries.

David Moyes must decide if Nemanja Vidic is fit to lead United. Vidic needed hospital treatment after suffering concussion against Arsenal immediately prior to the international break, but has now returned to training.

All three are expected to be available.

“It’s the league we are in and it’s something that we relish. You want to play at the best level. You want to test yourself against the best players.

“It is what you should want to happen if you want to be the best and play at the best level which is what Cardiff City want to do.”

“Malky’s done a great job, not just this season, but in past seasons with other clubs he’s been at. He’s done a brilliant job at Cardiff and they should really be thankful they’ve got him. He got them back in the Premier League and they’re doing all they can to stay there. You can see he’s working really hard at it.”