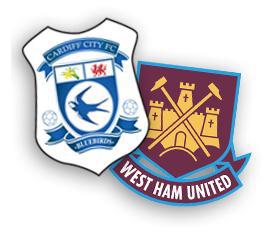 All attention is on Cardiff City Stadium this Saturday when West Ham United come to the Welsh capital hoping to to avoid a third crushing defeat in a week.

Even though Cardiff play their first league game under Ole Gunnar Solskjaer all the media attention has been on Sam Allardyce and his humiliated West Ham side.

The Hammers lost 5 - 0 at Nottingham Forest last Sunday in the FA Cup and 6 - 0 in midweek at Man City in the League Cup. Cardiff come into the game on the back of a superb 2 - 1 win at Newcastle in the FA Cup a week ago.

Allardyce is hanging onto his job by a thread and his side is in free-fall.

Cardiff have had a boost after the cup win and go into the game with a new signing, a fit again Craig Bellamy and a new manager who has won over the fans very quickly since his appointment.

West Ham are a severely wounded animal at the moment and Cardiff must not get too complacement against a side desperate to arrest their slide.

A home win for Cardiff would be massive, especially as the next two Premier League games are away at Man City and Man Utd.

Craig Bellamy is back from a knee injury as Cardiff boss Ole Gunnar Solskjaer takes charge of a Premier League game for the first time against West Ham.

Bellamy has been sidelined for two months with hamstring and knee problems but has trained this week ahead of the clash with the Hammers.

New signing Magnus Wolff Eikrem looks set to be named on the bench after arriving from Heerenveen earlier in the week.

West Ham boss Sam Allardyce will give Andy Carroll as much time as possible to prove his fitness.

The Hammers' record signing has yet to play this season due to a foot injury but could play some part in south Wales as the Hammers look to improve on 19th place in the table.

This will be my first home game and I'm looking forward to being in that dugout at Cardiff City Stadium. I can't wait to experience the atmosphere of playing in front of our fans.

"My first Premier League game is very exciting, obviously. When you play the opposition around you in the league it is an important game. We have prepared well and we are ready.

"I am in a similar position to Sam Allardyce and West Ham. We are fighting to be top of the second League in the Premier League. Sam has been around a long time and he knows what to do.

"When you get into this job you know you are signing a six-game contract. Win, then great. Lose, and you could be out. I’ve got enough to think about my own team. Big Sam will manage his side and I will manage mine. We will both think we can win it."

"We are professionals and we've got to take the criticism thrown at us because that's what happens in the game at this level.

"We've got to get out there, face the music and use it to anger us, if you like, make us mad, prove them wrong and win football matches."

Allardyce must decide if he will gamble on Andy Carroll.

"If everything goes according to plan then I have to make a decision based on all the information I get on whether Andy's feeling fine and training well.

"Ideally we'd like to progress it a little slower but based on the circumstances, in terms of where we are, then it may be a calculated risk which I'm prepared to take. Not in the team, no, but in the squad.

"We've got to talk to the lads who are looking after him and see if he's ready. Obviously it's a bit of a calculated risk if that is the case. We're going to see how training goes today and then make a decision from there."