Cardiff could pull themselves out of the relegation places if other results go their way, but they must beat West Ham in the Premier League on Saturday.

The Bluebirds are currently two points adrift of Southampton in 17th - who host third-place Tottenham on Saturday - but a win against West Ham could see them leapfrog the Saints.

But manager Neil Warnock said: "I don't think it's a must-win game but it's a very important game in the calendar. There are other games between now and the end of the season that will become must-win games, especially against the teams around us. 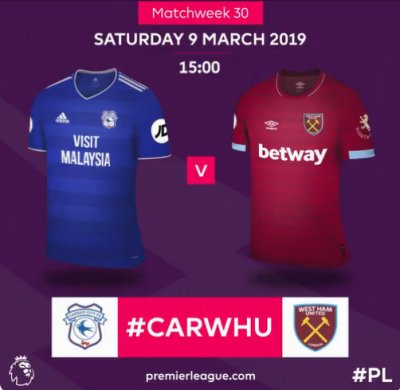 "We have to try and get something out of this game and be more positive than we have been. The lads have been a bit flat this week because it has probably been our worst week in the Premier League.

"You can see the disappointment of not being up to their own standards. We have to get back to that against West Ham. We have been a bit down because of the goals we have conceded. We want to make sure against West Ham we are on it from the start."

West Ham manager Manuel Pellegrini believes that playing a struggling Cardiff side will make their task harder, but they must go all out to win.

"It is my duty to convince the players that the position in the table of Cardiff will mean it is a more difficult game, not an easy one," he said.

"They will play at home, fighting against relegation and are not many points behind the teams above them, so we need to play with a high pace from the beginning, be a sharp team, be an aggressive team and try to attack and win the game."

Cardiff must reorganise their defence after Sol Bamba's season-ending injury. Bamba damaged knee ligaments in the 2-0 defeat at Wolves last weekend and Bruno Ecuele Manga is likely to be restored in his favoured centre-back position, with Lee Peltier remaining at right-back.

Harry Arter hopes to reclaim a midfield spot and Josh Murphy could return to the matchday squad after being dropped at Molineux.

Aaron Cresswell and Fabian Balbuena have been passed fit for West Ham. Cresswell limped off against Newcastle last week but has resumed training, while Balbuena is available for the first time since December after a knee injury.