Neil Warnock's side have picked up 32 points from the last 36 available in a stunning run of form that sees the club a maximum of five wins away from the Premier League.

The next week or so is going to test the Bluebirds resolve as they face Sheff Utd away (Mon 2nd), Wolves home (Fri 6th) and Ason Villa away (Tue 10th) all 7:45pm kick offs and all live on Sky Sports. 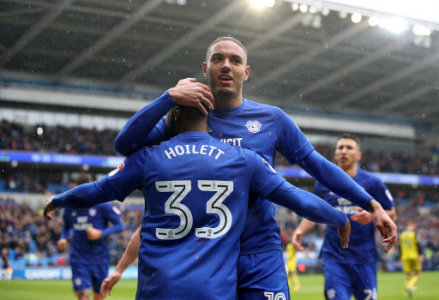 The race for Championship promotion is superb this season. Cardiff can't seem to shake off Fulham who themselves are unbeaten in their last 12 games having accumilated 30 points. Fulham are seven points behind Cardiff and have played a game more. To those looking in they think Cardiff have it in the bag, but the relentless chasing by Fulham who are just waiting for Cardiff to slip up means it's not over yet.

And don't rule out Aston Villa, they are 10 points behind City at the time of writing, but they play Hull away on Saturday evening ansd could go level again with Fulham. Having lost their last two games to Q.P.R. and Bolton Villa will surely see themselves out of the race for automatic if they lose again at Hull.

Cardiff's sights should be on Wolves though and on the title race, if Cardiff keep getting results then Fulham and Villa can do all they like but they won't be able to stop the Bluebirds. Wolves are six points ahead of Cardiff but the teams face each other at CCS next Friday. That coupled with a game in hand for City means the gap could be closed.

Back to yesterday's game. City made hard work of it early on after taking a lead through Kenneth Zohore who turned in Junior Hoilett's cross at the near post, Burton levelled through Darren Bent after the Bluebiurds were exposed down their right hand side. Bent getting a touch on the back post to turn in Lloyd Dyer's cross.

Nathaniel Mendez-Laing raced onto Zohore's flick to rifle an unstoppable shot past Stephen Bywater to make it 2 - 1 in first half stoppage time.

The result seemed in little doubt in the second half when Callum Paterson scored for the 4th consecutive game to keep Neil Warnock on course for an eighth career promotion.

Giving how tough the next three games look then if Cardiff still have a similar points gap after the Villa game then you wouldn't see anything left to stop them from a sensational climb to the top division.