Last night I made up for missing live football this weekend by going to visit "YOUR THOMPSON CARDIFF DEVILS" as the announcer kept calling them.

It's been several years since I last went to see a game at the National Ice Rink in Cardiff. Lawless, Moria, McEwan and Hope were in the team I first saw well over a decade ago. I recognised none of the names on show.

The game was the second leg of the Challenge Cup final. Cardiff were beaten 3 - 0 at Coventry last week and started the game with a mountain to climb.

I don't think I can fully paint a picture for you of a night at the Ice Hockey. Some of the key points though I'll try to illustrate. Firstly as it was a cup final it was sold out. I was lucky enough to pick up tickets but they weren't the best offering a restricted view behind a safety barrier but as the game went on most of the crowd were standing anyway.

Thanks to three drummers sat high above one of the goals and a DJ that kept shouting for the crowd to make noise, it was a raucous night out. Ice Hockey fans mostly contain the die hards with their oversized shirts and what appears to be utter die for the team support. They took up 75% of the crowd with a mix of allsorts filling the rest of the seats. From newcomers like me to girls dressed up for their Saturday night out in town. Just behind me was a pregnant woman who was clearly better served at home with one hand on the phone to dial for an ambulance and around the edge of the ice were those who wanted to see a ruck close up.

As it's not football you can quite freely buy and consume beer anywhere you like. So it didn't take too much for my goodself to get into the spirit (you know what i mean) and I took my seat with a pint and a giant hot dog.

Coventry came onto the ice to cheers from some 200 or more fans (looked more than their football team brought). Then the lights went down, the music was cranked up and onto the ice came YOUR THOMSON CARDIFF DEVILS. I don't want to keep promoting THOMSON but thats what they are called.

To get the feel for it the announcer (Ali you are pedestrian compared to this guy) sounded like he was announcing Rocky and Apollo Creed into the ring. It was that type of vocal output. The music was loud, ACDC, QUEEN, even the bloody Road to Amarillo was blasted out during the evening.

A singer took to the ice, the Coventry fans were invited to sing their anthem. That over the Welsh singer sang a superb rendition of the Welsh anthem. Good on them, great voice from the home support. Several (most?) of the players mights have hailed from the American continent but the support was home grown.

Down to the action. Cardiff were 1 up after 20 seconds. Coventry fans aghast, Cardiff fans bouncing. That was all the scoring for the first period (in Ice Hockey you have three periods of 20 mins each with a 20 min gap between them). Cardiff players picked up several penalities with at one stage, two Devils off the ice and defending against a full strength Coventry Blaze. They held on though.

There was a half way challenge with fans trying to hit a puck from the half way line into the goal but through a tiny hole in a board palced in front of the goal with Â£500 woth of THOMSON holiday vouchers up for grabs. No one won but a one guy went real close.

The second period (oh before I go on, you can top up your beer at any time), saw more goals. Cardiff went 3 - 0 up. The final was level. Before the second period ended though Coventry pulled one back to lead 4 - 3 on agg.

All the time you are watching the game the drums are beating. Incessant noise. The announcer asks the Coventry Blaze to make some noise, then he shouts even loader to get the Devils fans to make even more noise. All this with the home fans waving white towels in the air to make a great spectacle.

The drummers hit a different rythem depending on if we are attacking or defending. The teams change over all the time. Players on, the whole team off (bar the keeper). A stop in play allows the DJ to blast out another tune. In fact if there was an obvious change of tone in the song you can see the referee waiting for the natural break in the music before starting play.

On the ice the action is fast and furious. The puck pings around at such high speed. The players take pleasure out of crunching each other into the plexiglass? flexiglass? perspex?.

The third period is under way and Cardiff are still a goal down. The huge digital display that hangs above the ice is showing time ticking away. 34 seconds to go and there's a break in play. A Devils time out I think it is. Then we are away again, Coventry fans are starting to believe it's in the bag before the Devils score with 20 seconds remaining. Mayhem in the crowd and on the ice. Time is up. 4 - 4 on agg. Overtime.

5 mins OT is played with no score. Then it's penalties.

In Ice Hockey a penalty starts with a player taking control of the puck on halfway and trying to advance and beat the keeper. Not easy, especially when the Coventry keeper looked like he'd ate all the pies.

5 penalties each and there was no score. Sudden death.

Coventry missed, gasps from the Blaze fans, the Devils player sets off, a jink right followed by a jink left and slash, the puck is buried into the net. More mayhem. Players piling on top of each other followed by all sorts of awards and pictures, champagne and beer all over the ice. Coventry fans have left the building when the Cardiff Devils lift the trophy.

All told I was there for close on 4 hours.

It doesn't matter what sport it's in, it's always great to see Cardiff win a trophy. Will we go again? I think so. 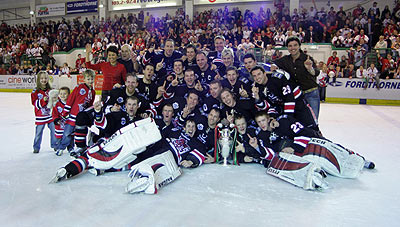