A three-year broadcasting deal in place from the start of the season saw each Premier League club's revenue increase.

Liverpool picked up 1.57 times more than bottom earners Cardiff but the ratio is the smallest in any of Europe's top leagues - Premier League television revenue is distributed in a more competitive manner than in other major leagues on the continent. 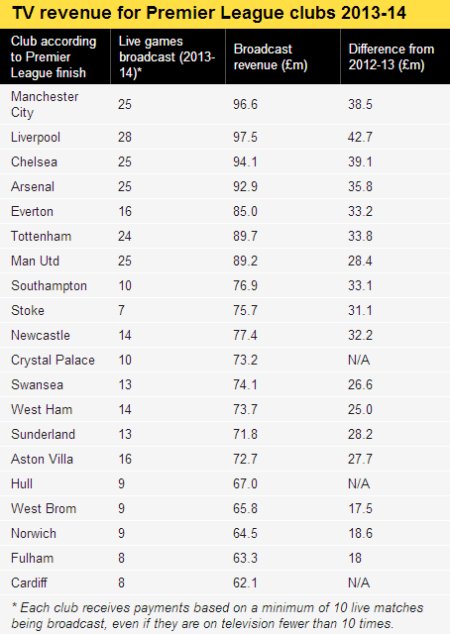 In all, Premier League clubs were paid £1.6bn from broadcasting revenue for the season, an increase from £972m in the 2012-13 campaign.

Half of all domestic broadcast revenue is split evenly among the league's clubs, with a quarter of the money paid according to a team's league position, and the final 25% depending on how often a team is televised.

Overseas income amounted to a payment of £26.3m to each club.

Cardiff were the league's lowest earners, but their earnings emphasise the scale of the Premier League's current £3.018bn deal over three seasons.