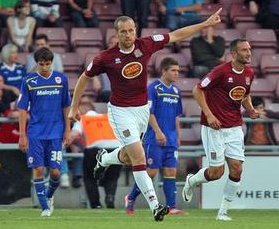 Despite leading from a 4th minute Heidar Helguson penalty Cardiff have been knocked out of the Carling Cup.

City lost their lead before half time when David Artell headed Northampton level. City failed to pick up Artell as he met a long throw,

Steve McPhail lasted 18 mins before having to come off, he was replaced by Tommy O'Sullivan.

The second half was barely a couple of minutes old when Alex Nicholls scored with a thumping header from Ben Harding's corner. Shocking defending from City that will not have pleased Malky.

Cardiff pressed for a leveller but the Cobblers defence didn't put a foot wrong and City make a shock exit in round 1 of the competition that they went all the way to Wembley in last season.