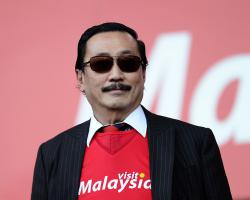 The Sky Bet Championship club will hold a board meeting on Friday in which Cardiff owner Vincent Tan could abandon the controversial red re-branding exercise introduced in 2012 and restore the club's traditional blue colours and bluebird badge.

Tan told Sky Sports as recently as Christmas Day that 'Cardiff will stay red' and that he would take no notice of protests planned by supporters' groups against the re-branding and the threat of thousands of season tickets not being renewed.

But Tan called the meeting with supporters after a record low Cardiff City Stadium crowd of 4,194 saw the Bluebirds beat Colchester 4-1 in the third round of the FA Cup on January 2.

Cardiff fans could accept the club playing in red away from home if Tan returns the club to blue.

"It was time to bridge the gap with our supporters.

"It was very positive and the fans showed a great level of respect to the owner.

"We will now have a board meeting on Friday where things will be under discussion.

"I think Vincent will give this a great deal of consideration."

Cardiff supporters' groups hailed the positive atmosphere at the Cardiff City Stadium meeting and welcomed the possibility that the club's traditional colours could soon be restored.

Supporters' Trust chairman Tim Hartley said: "We were really glad that Mehmet called the meeting and there was a great cross-section of people there, representing not just the fans and their representatives but also the business community in Cardiff, a sponsor, an MP and a councillor.

"It was a unanimous vote - and Mehmet called for the vote - on the blue and everyone said we need to return to blue to bring back unity to this club.

"We are hoping that the board meeting will actually decide to tell Vincent Tan that, 'We've had an experiment, you tried it and it didn't work.'

"There's unanimity to go back to blue for the benefit of this club.

"The business case is there, the community case is there and we will say, 'The supporters will follow you and we will be united behind the club if you return to blue with the bluebird on the crest.'

Sian Branson, of supporters' group Bluebirds Unite, said: "I think we can show Vincent Tan how great we can be as fans and how great this football club can be

"They asked me, 'What do you think the atmosphere would be if we want back to blue?' I said: 'You won't see a party like it in this city.'

"We'll have a march and I'll walk up the front of that march with a banner saying: 'Thank you Vincent Tan' if we go back to blue.

"We've still got to wait but I'm positive."

Vince Alm, of the Cardiff City Supporters' Club, thanked Tan for listening to the views of fans.

"We want to be united and pushing forward and we feel going back to blue is the best way of getting fans back in the ground," Alm said.

"We're very respectful of the investment we've had off Vincent Tan but we talk about spirit and we want to show the passion of Welsh people as one."