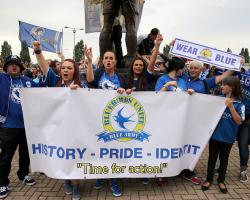 The Welsh outfit play Liverpool at Cardiff City Stadium in the Barclays Premier League at 3pm that day and a group of home supporters are set to march to the venue from the nearby Admiral Napier pub an hour before kick-off.

Having reached the ground, they then plan to sing "pro-blue songs" and give a "show of blue pride".

It is proposed that they will then once again make their point known from the stands from 19 minutes and 27 seconds into the match with scarves, flags and songs

Cardiff won the FA Cup, their only major honour, in 1927.

A statement on the Cardiff City Supporters Club website said of the protest: "It will be an opportunity for all Cardiff City fans to show that they do not support the rebrand of the club's colours and strongly desire a return to Cardiff City's traditional blue kit and Bluebird badge.

"In addition all other supporters groups, individual supporters and their families are invited and encouraged to attend.

"The one and only objective of the march is for fans to display a mass show of pride in Cardiff City's heritage and tradition and to peacefully demonstrate our strong desire to return to our blue kit with Bluebird badge."

Cardiff owner Vincent Tan's controversial decision to change the team's shirts from blue to red and badge from a bluebird to dragon design took effect from the start of the 2012/13 season.