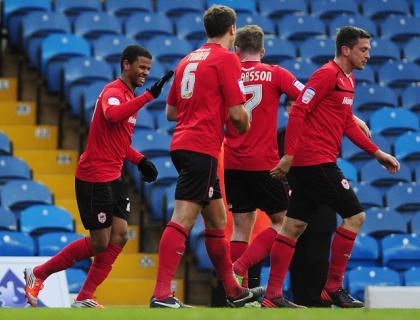 Mackay introduced his £650,000 buy from Sunderland in an inspired 62nd-minute substitution. Young Leeds defender Sam Byram's careless clearance ran to Craig Bellamy whose low shot was expertly turned past Paddy Kenny by Campbell, who was immediately buried by his overjoyed new team-mates.

"I am delighted for Fraizer. He is very humble and has rapidly bought into our team ethic," Mackay said.

"He is a willing runner and an intelligent footballer who knows where the goal is.

"He has not played a lot of football lately so the mind was willing and the flesh was weak, but he will soon be up to speed.

"We needed to get him match minutes, but at the same time we need to protect him [having] not played too much football recently.

"He's another one that desperately wants to play football and wants to be part of the group, which is great."

Victory restored Cardiff's 10-point lead over the chasing pack and Mackay was relieved to grab a win against a Leeds side, who toppled high-flying Premier League Tottenham in the FA Cup just last weekend.

Next Saturday Cardiff are back in Yorkshire where they face Huddersfield Town, ko 3:00pm.