The last three matches played have seen Cardiff score seven times. Incredibly, that accounts for over a quarter of all the goals scored by the club in the league this season. 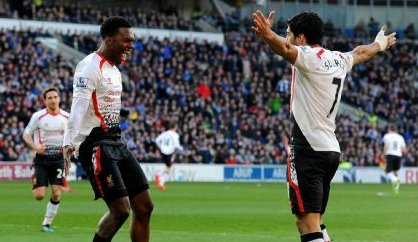 The previous four Premier League games were scoreless for City so a seven goal haul, despite losing two of the games, is something to build on.

Another week and another refereeing decision against Cardiff has brought attention to the silly rule of making a player leave the pitch after receiving treatment. Referee Neil Swarbrick's insistence that both Kevin Theophile-Catherine and Jordon Mutch stand on the side-lines after Liverpool had been awarded a corner, cost Cardiff dearly.

The match was poised at 2–2 early in the second half. The first period saw Mutch put Cardiff in front before Luis Suarez levelled. Fraizer Campbell put Cardiff back in front only for Martin Skrtel to bring the scores level again.

Liverpool won a free kick after Daniel Sturridge tripped over his own boot laces. The next passage of play saw the two Cardiff players go down in the box.

Both were hit by shots from Suarez. The first to go down was Mutch as he took a hit to the body when he blocked the free kick from the Uruguayan. The ball bounced back to Suarez who saw his second effort bounce off Theophile-Catherine’s head and out for a corner.

Because two Cardiff players were down, the Liverpool physio also ran onto the pitch with the Cardiff medic. Theophile-Catherine needed more attention after being struck in the head and was tended to by the Cardiff man. By this time Mutch was on his feet taking a drink but even though he received no treatment the referee insisted that he leave the field of play.

With the two Bluebirds watching from the touchline, Skrtel headed Liverpool into a 3–2 lead, a lead they built on to win the game. Cardiff's heads dropped after the goal and Liverpool, through Suarez and Sturridge, scored twice more to move into a 5–2 lead. Mutch pulled one back to make it 5–3 but it was Suarez who made the headlines when he scored with the final attack of the game to secure his hat trick.

Mr Swarbrick may have made the right decision according to the laws of the game, but this proves the law is faulty. Liverpool showed no mercy when presented with the chance to attack nine men from the corner -- another all too common decision this season to go against the smaller side. There are precedents that goalkeepers do not have to leave the pitch after treatment. Surely there should be a rule that allows a compromise when two or more players go down.

Liverpool would have probably gone on to win the game anyway. The quality they possess in attack was on show again against Cardiff. Back in December, Suarez ripped the City defence apart in a devastating spell at Anfield and he and Sturridge were at it again at Cardiff City Stadium.

For Cardiff, the real work starts now. This coming Saturday the Bluebirds are away at West Bromwich Albion. A match that Cardiff really need to win, but crucially it's a game they absolutely cannot afford to lose.

Off the pitch saw the biggest demonstration of fans in support of Cardiff City's blue heritage. An estimated 3,500 supporters marched together to the stadium proudly displaying blue tops, scarves, hats and flags. The peaceful protest was continued inside the stadium where on 19 minutes 27 seconds (to reflect the year Cardiff won the FA Cup) the fans raised their blue scarves and flags in a defiant display against watching owner Vincent Tan. The sea of blue was an impressive sight and caused Tan to turn away from the display for a moment. The Malaysian has stated that the club will remain red while he is in charge. His only reason for the change is because he likes the colour and feels it's lucky.

The colour is alien to many Cardiff City fans with thousands caught in the middle wanting to support their team while hating the disregard of its traditional identity. With the FA finally starting to make a stance against owners who think they can just re-brand over 100 years of tradition on a whim (by rejecting Hull City's plan to change their name to Hull Tigers), then maybe no other club will be subjected to the destruction of its identity.

The fans gave the team their full support during the game while making it clear that the support for a return to blue will not go away.

One day Cardiff City will play in blue again. The sooner, the better.